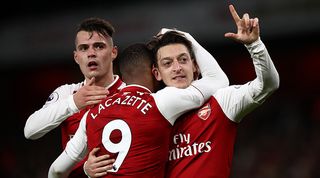 Appointed in November 2017 to replace Steve Rowley, Arsenal’s chief scout for the last 25 years, Mislintat arrived with a strong reputation. The Borussia Dortmund talent-spotter was responsible the signings of Japanese attacker Shinji Kagawa from the J.League, young striker Robert Lewandowski from Lech Poznan, as well as defender Mats Hummels from Bayern Munich (whom the Bayern hierarchy didn’t seem to rate).

More pertinently for Arsenal, he also played a key role in bringing Henrikh Mkhitaryan to Dortmund from Shakhtar Donetsk in 2013, as well as recommending Pierre-Emerick Aubameyang to the club having spied his potential at Saint-Etienne.

There’s no doubt that the arrivals of Mkhitaryan and Aubameyang this month are down in no small part to Mislintat’s influence and connections. This bodes well for the future, given that the Gunners’ scouting network – which once lured young stars including Patrick Vieira, Nicolas Anelka and Robin van Persie to Highbury – had been stale for years.

Mislintat’s prominence at Westfalenstadion angered former Dortmund coach Thomas Tuchel, however, who didn’t appreciate the recruitment guru's day-to-day involvement with players – to the point where he was banned from their training ground in Brackel. Arsene Wenger, who has less than 18 months left on his contract, has always been notoriously tetchy at any suggestion that his authority at the Emirates might be remotely eroded. Yet Mislintat, who worked at Dortmund for a decade, will be in N5 for the long haul. Whether Wenger is too remains unclear.

2. Transfer dawdling is over

Raul Sanllehi becomes Arsenal’s new Head of Football Relations this month. The vastly experienced former Barcelona director of football and Nike executive has been brought in to sharpen up Arsenal’s often-ponderous approach to completing player deals. It was not Sanllehi’s role to pick the players at Barcelona but to complete negotiations, as he did with Neymar’s heralded arrival at the Camp Nou from Santos in 2013.

Over the last few years it was the retiring Dick Law, working alongside Wenger, whose job it was to complete transfers. Arsenal's track record at closing deals has been decidedly mixed, despite having been linked with a raft of big names.

The Aubameyang deal was completed by chief executive Ivan Gazidis and contract negotiator Huss Fahmy, and Sven Mislintat was also present to meet his former find. Whether or not they called on Sanllehi for advice is open to conjecture, but Arsenal’s (almost complete) new management structure got the club-record deal over the line safely.

This cutting-edge new structure slices through indecision, and ushers in a new era of slick and efficient transfer activity. The Auba deal bodes well for the future.

3. End of the underachievers

The days of overpaid, underachieving squad players are coming to an end at Arsenal. Theo Walcott, Mathieu Debuchy and Francis Coquelin earned handsomely without always justifying their reported salaries. Although the Gunners are now rather thin on the ground – especially with Arsenal’s most realistic chance of Champions League qualification coming by winning the Europa League – there's a leaner feel to the squad.

Arsenal have long been regarded as an egalitarian club that pays its squad players rather too well, making it difficult to sell on them on if they fail to cut the mustard. Their January incomings and outgoings strongly suggest they will pay top stars exceedingly well (see that new contract for Mesut Ozil), cull the expensive underachievers and give youth team graduates like Ainsley Maitland-Niles and Reiss Nelson an opportunity to shine in future.

Such a layered approach, which should gather pace this summer when Arsenal are likely to be highly active once more, will reintroduce a sense of aspiration and accountability among the players. Crucial factors for a club which has acquired a 'warm bath' feeling in recent years.

There is much work to be done in giving this Arsenal team a stronger spine. As the capitulation at Swansea demonstrated, a new goalkeeper is needed to replace the increasingly leaden-footed Petr Cech; a top central defender is required to inject a sense of calm and organisation, as is a high-quality defensive midfielder to screen the back four more effectively.

That will cost a small fortune, and Arsenal’s moneyed rivals are able to gazump them if they get the opportunity. It will also be more difficult if the north Londoners don’t have the lure of the Champions League to offer potential new signings. Yet now that chronic malcontent Alexis Sanchez has taken his dogs and hissy fits to Manchester, and Ozil has penned his new contract, Arsenal can identify their transfer targets and focus on new signings this summer, rather than have to concern themselves with a mass exodus.

A sense of calm and focus will set in following the turbulent conclusion of Storm Alexis.

Manchester United have been more than happy to pay inflated salaries since the Dave Sexton era (Garry Birtles, anyone?). Now Manchester City, just as Pep Guardiola claims the club is running low on cash, seem able to pluck their last £57m from out of the biscuit tin when they need it.

Ranked! EVERY Premier League club by their January transfer business

Unless ‘Silent’ Stan Kroenke sells up (which doesn’t seem likely given that he's just bought some new shares), Arsenal can't compete at that kind of level. In a straight cash fight between these three sides for a player, the Gunners will never win. So, while Arsenal will always be linked with the biggest names, the Manchester clubs, PSG, Real Madrid and Barcelona operate in a different football universe.

That doesn’t mean Arsenal can’t compete for the top prizes, but it does make it a lot harder. Aubameyang’s arrival and Ozil’s new contract don’t even begin to solve their deep-rooted defensive issues, ongoing concerns about ineffective coaching or the question of who Wenger’s successor will be.

However, it does prove that despite the prophets of doom, the team’s stuttering league form and turbulence of recent months, Arsenal will always be capable of attracting big names to N5. That won’t change after Wenger’s tenure ends – whenever that may be.