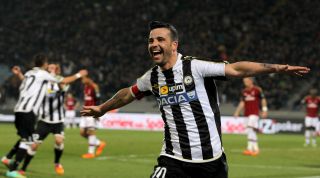 Antonio Di Natale might be one of Italy's finest-ever goalscorers, but he has always been on the periphery of the big time.

How the prolific striker slipped through the net is simply down to the 36-year-old shunning the lures of one of Italy’s top teams. Content to lead from the front at Udinese for the last 10 years, Totò has now moved into Serie A’s top 10 goalscorers of all time, joining Gabriel Batistuta on 184 after netting the only goal against Milan on Saturday.

Many thought the former Italy international was already among the elite goal-getters, but his deflected shot in September’s win over Genoa was credited as an own goal by Emanuele Calaiò.

Now the veteran can look ahead to catching former Lazio striker Giuseppe Signori, and the legendary Alessandro Del Piero on 188 goals. There’s also the chance of surpassing Swede Kurt Hamrin, who scored 190 goals during spells at Fiorentina, Milan and Napoli from the late 1950s to the early ‘70s.

For the record, Roberto Baggio is in sixth place on 205 goals, while the only other active player in the list, Francesco Totti, has scored 232 in second behind goal kingpin Silvio Piola on 274. Also up there from eras gone by are Gunnar Nordahl, Jose Altafini and Guiseppe Meazza.

Each would be almost instantly recognised when mentioned in public, which makes Di Natale even more of an anomaly in such exalted company. Although Neapolitan by birth, he never wore the light blue shirt, and instead moved to Empoli in Tuscany when he was just 13. Eight years later he would settle in Udine, as far away from a football hotspot as is imaginable.

It was at provincial Udinese where he took on the role of leading man, but when a Hollywood-like offer from Juventus arrived he turned it down flat, despite the two clubs having already agreed terms. It seems those on the outside looking in have found that decision harder to take than the man himself.

Surely turning out for the Turin giants would have been the pinnacle for any player, they said, especially in the last three title-winning years. Then again he hasn’t done so badly, landing the Capocannoniere (golden boot) crown two years in a row in 2010 and 2011, and only been denied a record-breaking hat-trick in 2012 by Zlatan Ibrahimovic. In each of the last three seasons he has been named in Serie A’s team of the year.

More than his achievements on an individual level into his 30s, however, his appetite for goals and leading from the front saw Udinese qualify for the Champions League preliminary round in 2011 (where they lost to Arsenal). They took third the following year, which by any stretch is pretty incredible for a club that has never won a major trophy in its 117-year history.

Last year’s fifth-place finish, aided by Di Natale’s 23 goals, was just as impressive considering Udinese were tipped to fall away after selling the likes of Gokhan Inler and Mauricio Isla. But no matter which rising star has come through only to leave soon after – Alexis Sanchez is a good case in point – the club’s diminutive veteran has stayed to help defy the odds.

It’s why this season, when it seemed manager Francesco Guidolin had the makings of a genuinely competitive team, any setback has been taken badly by the fans. That may give a telling insight as to why Di Natale turned his back on joining a big-city club.

Maybe he felt it was best to keep expectations in check, and it can be no coincidence that he is warmly received back home in Naples for the simple reason he does not play there. Udinese’s talisman has been able to concentrate on playing without the added pressure of the Piazza until this season, when he has been on the end of his first stirrings of criticism.

After a humbling 3-1 home defeat to newly promoted Hellas Verona in January, he decided it was time to call it a day. Many, including Guidolin and club president Giampaolo Pozzo, took it as a heat-of-the-moment reaction – but Di Natale remained steadfast. He would be hanging up his size-six boots at the end of the season, claiming he’d scored more goals than had nights out with his wife. It was time to enjoy the simple pleasures of a family man.

He has various business interests away from the game to attend to as well, but if Saturday’s performance is anything to go by then it would be no surprise to see the little frontman back in July for pre-season, rather than donning a suit and tie.

Udinese came into the match against Milan from the dreaded ritiro (retreat), after a 3-0 defeat at Cagliari. The decision to isolate the players from everyday life for five days had not gone down well with Guidolin, whose public disapproval may have been down to the fact he was suffering from a bout of flu.

Instead, however, it was Clarence Seedorf’s Milan that were caught cold. Di Natale ran Philippe Mexes ragged and exercised his predatory instincts inside the area to slot home from close range, after some excellent interplay between Roberto Pereyra and Bruno Fernandes in the build-up.

Guidolin finally managed to haul off a hobbling Di Natale with just over 10 minutes remaining. He’d given every ounce of energy in another forward play masterclass that may well encourage him to defy Father Time for a while longer yet.