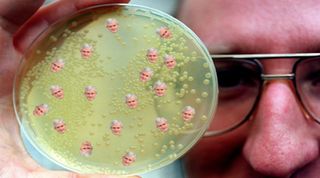 After weeks of intense speculation, Mark Hughes has finally been confirmed by experts.

It has been almost exactly six months since the last incidence of Mark Hughes - a moderate case which petered out within a year, it's epicentre being West London.

But it was generally agreed among the Hughes-watching community that the end of the football season would bring about conditions conducive to Hughes, and now those fears have proved founded.

"It is my duty this morning to inform the public of Mark Hughes," Hughes Advisory and Monitoring Board chairman Hugh Marks told FourFourTwo.

"While we appreciate the news will shock and worry many, for us insiders it is no great surprise."

"There is always a sense of unease at this time of year and recent climactic events have indicated the potential for at least a temporary Hughes.

"We would advise the general public not to panic and to go about their daily lives as normal. We remind them that recent onsets of Hughes have usually resolved themselves peacefully and with very little event."

The latest Hughes will be felt most acutely in the Stoke-on-Trent area, but analysts have indicated that on rare occasions the effects could be felt as far south as London and north as Newcastle.

"That really is an unlikely scenario," Marks insisted. "I can honestly say those in London will most likely be completely unaware of Hughes."

While news of Hughes has already led to a mass evacuation of Stoke and sent house prices tumbling, a poster campaign has launched in the region reminding the residents that they overcame a Grade-12 Pulis, which is widely regarded as far more severe than even the most protracted Hughes.