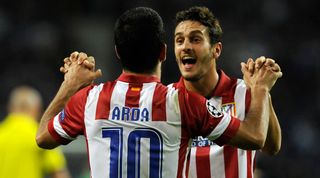 When LLL came out of seeing epic monster vs giant-fighting-machine film Pacific Rim, the first thing the overstimulated blog had to do was calm down. That took a while. After that, we searched the web for a good three minutes to see if huge, building-crushing robots were ever going to be possible. The answer appears to be negative, which seems a bit of a shame.

However, Atlético Madrid are keeping LLL happy at the moment with their bellowing, roaring, and relentless squishing of all rivals. The Rojiblancos were on the brink of suffering their first setback of the season in all competitions against Porto – a draw counts as a bad result these days – until Arda Turan popped up four minutes from time to seal a 2-1 away win and 100% winning record for Atlético in Spain and Europe.

“Atlético are made of iron,” boomed Marca’s match report. “This is a group that aspires to be the best in every match,” roared Diego Simeone. “It was tough getting into the game but the character, effort, and the fitness that the players have that allows them to face difficult games,” said the Argentine on his team’s cunning plan.

The other Spanish side bragging a perfect record is Barca. The win over a gritty Celtic has been met with relief in the Catalan press, considering last year’s mess-up and usual smugness. Their satisfaction mainly centres around the team grabbing victory without Lionel Messi and with Marc Bartra in the back four.

“From the first moment the team went out focused, with the desire to put on a show and with the pride to confirm their superiority in the group,” purred Sport’s Josep Maria Casanovas.

Santi Nolla was just as chuffed writing in Mundo Deportivo, opining that “in Glasgow, Barcelona offered a full repertoire of their skills. This Barcelona was a great team. And Messi wasn’t there.”

Spain's other two Champions League sides are in action on Wednesday night. Real Sociedad’s troubled start looks set to carry on in Germany against Bayer Leverkusen, while Carlo Ancelotti will be thanking his Italian stars that it isn't Juventus coming to the Santiago Bernabeu for their Matchday Two clash, but FC Copenhagen instead. A clash against the former could have ended very badly indeed.

Real Madrid will be without the still-knacked Gareth Bale for the Danish invasion, and unless a hammering comes to pass against the visitors, the team could be booed off the pitch for the second time in a week. “It is normal that the fans are angry,” said Ancelotti at his pre-match press conference, “I am the one responsible and I am going to fix it. It is a motivation.”

Two weeks ago, the battering of Galatasaray didn’t quite give Real Madrid the lift and confidence boost they needed to get their campaign going. The pressure is on the manager and players to succeed this time.