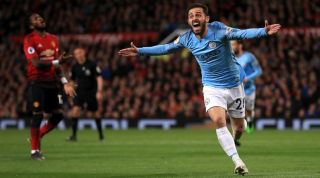 Only time will reveal the true standing of the UEFA Nations League in the hierarchy of football’s international competitions – be it on par with the Confederations Cup, or something approaching a genuine major honour, a notch below the European Championships and World Cup.

But the immediate impact of the first edition of the Nations League could be to elevate the star of its final stages to Ballon d’Or contention.

Cristiano Ronaldo’s semi-final hat-trick against Switzerland may have stolen the headlines, but Bernardo Silva was the orchestrator of Portugal’s success on home soil, neatly assisting Goncalo Guedes’ title-clinching strike in the final against the Netherlands, and subsequently named Player of the Tournament.

Injury ruled Silva out of Portugal’s Euro 2016 triumph, so the Nations League finals have provided him with his finest international moment to date. And the way the 24-year-old schemer acted as chief conductor and creator for Fernando Santos’ side demonstrated how he is now as vital to this Portugal team as Ronaldo, who shone against Switzerland but was ineffective in the final.

For Silva, his Nations League showing is the exclamation mark on a stellar season. At club level, he was at the forefront of the cringeingly self-anointed “Fourmidables”, claiming an unprecedented domestic treble with Manchester City and establishing himself as arguably the key player in one of Europe’s most talent-rich teams.

With Kevin De Bruyne missing much of the campaign, Silva stepped up; and as David Silva ages, City have a worthy heir in his namesake.

The rise in prominence of individual awards such as the Ballon d’Or sits uneasily with many footballing traditionalists, and not without reason; the prestigious, 63-year-old award has at times felt like little more than a popularity contest for the game’s superstars over the last decade.

But there could be few more palatable recipients than the unassuming, hard-working, limelight-shunning Silva.

The official criteria dictated to Ballon d’Or voters – made up of selected journalists and international manager and captains – state that the award is presented “according to on-field performance and overall behaviour on and off the pitch”. Such vague wording makes voting highly subjective, but what Silva has achieved this year must tick all the boxes.

With City, he has won every available domestic honour and was named the club’s Player of the Year, ahead of the likes of Raheem Sterling and Sergio Aguero. He scored or assisted and starred in some of the biggest game’s City faced, such as the crunch Manchester derby in April, the dramatic Champions League exit at the hands of Tottenham and the 6-0 FA Cup final mauling of Watford.

And now he has added international success with Portugal to his claim to be recognised among the very best players in the world.

Five-time winner Lionel Messi is once again considered a frontrunner for the Ballon d’Or this year, while Liverpool’s Virgil van Dijk is being tipped to become the first defender to win the award since Fabio Cannavaro in 2006.

At the very least, Silva is worthy of a place on the podium.