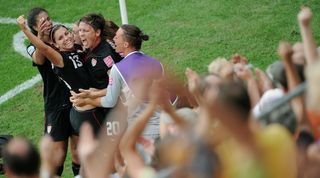 The stakes weren’t particularly high for New Zealand and Mexico’s final Group B game in the small German town of Sinsheim. The former had already been eliminated from the tournament, while the latter needed one almighty and unlikely goal swing to progress at the expense of England. But the Football Ferns – who had lost of all their eight previous World Cup matches – ensured that the game still went down in WWC folklore. Indeed, losing 2-0 at the 90-minute mark, John Herdman’s side somehow then found the net twice in stoppage time, with the crucial equaliser coming from teenage amateur Hannah Wilkinson. It was a fairytale end which, of course, could only be celebrated one way – a World Cup debut for the Haka.

Dubbed the match of the 2015 tournament before a ball had even been kicked, this thrilling game of two halves certainly justified all the hype. Indeed, although the two-time champions and the country ranked just two places below them didn’t produce a glut of goals, they both delivered the kind of free-flowing quality football worthy of a final rather than a last-eight tie. As with so many of their male counterparts’ victories, the Germans’ super proficiency from 12 yards proved to be the deciding factor – with both their late normal-time penalty and all five shootout spot-kicks finding the net.

Having finished third in the previous World Cup, Sweden were expected to sail through the group stage in front of their home crowd. But following a shock opening defeat to Brazil, the hosts appeared on the verge of a swift exit when they then found themselves 2-0 down at half-time to eventual runners-up Germany. But Bengt Simonsson’s side rallied brilliantly after the restart, and thanks to two goals from Malin Andersson either side of future World Cup-winning coach Pia Sundhage’s equaliser, the Swedes inspired the rather modest crowd of 5,855 to make some deafening noise.

Underdogs Nigeria had contained eventual Golden Boot winner Sissi for 104 minutes before the playmaker scored the WWC’s first ever Golden Goal. It was a doubly devastating blow considering the Super Falcons had miraculously clawed their way back from a three-goal deficit. Indeed, Brazil looked to have sewn their quarter-final tie up by the 35th minute thanks to a brace from Cidinha and a looping cross-shot from Nenê. But an astonishing second-half display from the African nation – who had perhaps wisely substituted goalkeeper Ann Chiejine at half-time – suggested a major upset was on the cards. However, a previously AWOL Sissi broke Nigerian hearts with a stunning free-kick which had Brazil coach Wilson de Oliveira Riça hailing her the “Queen of Soccer.”

“I don’t know if you can write a better script,” Abby Wambach understandably pondered following one of those remarkable games that featured everything but the kitchen sink. A second-minute own goal, a contentious red card, a missed spot kick, a successfully retaken spot kick, a wonder strike from the world’s best player, an equaliser in the dying seconds of extra time, a dramatic penalty shootout. The Dresden-staged quarter-final was the fourth World Cup meeting between the two nations but it undoubtedly provided more tension, excitement and AC/DC-assisted air guitar celebrations than any other.

ORDER A COPY, THEN SUBSCRIBE! 3 ISSUES FOR LESS THAN £10