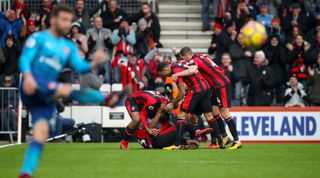 “Transition” is one of those irritating sporting neologisms. A non-specific term, it’s used to explain long periods of under-performance, coyly hinting at a brighter future which isn’t obviously apparently.

Nevertheless, Arsenal are in transition. At Bournemouth on Sunday, they travelled to the south-coast without Mesut Ozil and Alexis Sanchez. Both were signed as decadent symbols of the post-Emirates Stadium age, signalling an end to enforced austerity, and yet each is now busy plotting his own exit. Sanchez is expected to complete a move north in the coming days, while Ozil - absent here through injury - is expected to depart once his contract expires in the summer.

On the one hand, football teams should always total more than the sum of their parts. On the other, so much of Arsenal’s identity is tied to those marquee players. The first-half at Dean Court seemed to confirm that: the visitors were directionless and imprecise. Bournemouth can be a stubborn opponent at their best and they keep the ball nicely enough, but are yet to shed their defensive fragility. As Liverpool showed not so long ago, playing quickly and with confidence nearly always brings rewards here.

Arsenal’s forays forward were sporadic. Jack Wilshere controlled the middle of the field nicely enough, repeatedly pirouetting out of traffic, but Arsene Wenger’s hodgepodge forward line - Alexandre Lacazette, Alex Iwobi, and Danny Welbeck - spluttered and stumbled. Ainsley Maitland-Niles clipped the angle of post and bar with a speculative drive, but Bournemouth’s players would have returned to the dressing-room encouraged by how little they'd had to do to protect their own goal.

The horizon isn’t necessarily bleak. Sanchez will almost certainly leave, his head having been irreversibly turned, but Arsenal are reportedly close to completing the signing of Malcom, Bordeaux’s incendiary Brazilian forward. Good news according to those who know. The trouble, however, is that without a proper cast of headliners to which Wenger can tether his team’s ethereal flair, they will likely continue to drift.

Arsenal are rarely ugly to watch but, at their worst, their pretty patterns can wreak of pointlessness. In that kind of mood, they are alarmingly corinthian: all first-touch and tight turns, no winning imperative at all. They become, for all intents and purposes, the accepting handshake of defeat.

Attempting to defeat that theory, Iwobi produced the game’s first moment of incision on 52 minutes, weighting a through-ball between centre-half and full-back for Hector Bellerin to chase, gather and, after a half-block by Asmir Begovic, score. Nice football, certainly, but a goal which was gifted rather than mined; Iwobi could have rolled a medicine ball through that passing channel.

Worryingly, taking the lead didn’t jolt any sort of authority into Arsenal. Iwobi ran through on goal shortly after, but tripped on his own shadow, and further half-chances were dithered over and lost.

And then, inevitability arrived: Ryan Fraser broke down the Bournemouth right, carved a cross between Petr Cech and the covering defence, and Callum Wilson - somehow  - equalised. It was a goal which fed the narrative: Arsenal’s inability to protect leads away from home. Arsenal’s lack of desire. Arsenal’s lack of commitment.

Four minutes later, the storyline calcified. A long ball was allowed to drop in the visiting penalty-box and the scrambling Wilson forced a ricochet into the path of Jordon Ibe, who drilled the ball beneath Cech. Dean Court burst with joy, the home players jumped into a giddy pile over in the far corner and Arsenal, even with so much time remaining, seem to know their fate.

In many ways, it was perfect. Unideal for Wenger and Arsenal, of course, but still an appropriately vivid portrayal of their deficiencies. Going behind typically provokes a furious response from the very best sides. When they concede, their players bristle with incredulity and rage against the deficit as if represented personal affront. Arsenal didn’t. There was a retaliation of sorts and the speed of their passing increased, but there was a distinct absence of ego to it - no single player who truly believed that an equaliser was in their future, nobody who obviously wanted the responsibility of digging the side out the hole.

It was flimsy and half-hearted. Granit Xhaka looped a long-range shot limply into the crowd and a few crosses were arrowed into the box, but as Bournemouth's resolve not to be beaten hardened, Arsenal desire to deny them melted away. Nobody thought a third goal was coming: none of the players, none of the travelling supporters, and probably not even Wenger himself.

More broadly, it's afternoons like this which allow you to understand the place this team now occupies in the game. Nobody hates Arsenal anymore. Sanchez and Ozil have provoked a certain type of discourse in the past, Wilshere too, but the team as a whole seems only to invite mocking satire. The game is currently at its angriest and supporters aim their incoherent fury, almost in equal measure, towards every other member of the nominal top-six. Arsenal are the exception, attracting only pitiful smiles and jokes which have been made dozens of times before.

Transition or otherwise, it can't continue for much longer.