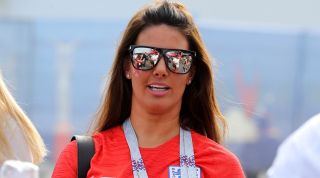 Coleen Rooney has accused Rebekah Vardy of selling her private stories to the media via Instagram, and Twitter has stepped up to do what it does best.

After suspecting that Rebekah – who is married to Leicester striker Jamie – of leaking information to a British tabloid, Coleen blocked all but one of her Instagram followers from viewing her stories.

This has been a burden in my life for a few years now and finally I have got to the bottom of it...... pic.twitter.com/0YqJAoXuK1— Coleen Rooney (@ColeenRoo) October 9, 2019

The wife of former England international Wayne then began to make up fictitious events – including two related to "gender selection" in Mexico and a flood in the basement of her new house – to see if they continued appearing in the press.

And then came the Poirot-esque bombshell: Rooney revealed on Wednesday that she had blocked every account from seeing her Instagram Stories... except Vardy's.

In a great advert for the Notes app, the 37-year-old Rebekah has denied that she is behind the leaks and says she is “disgusted” by Rooney’s allegations.

Football fans probably anticipated a quiet few days at the start of the October international break, but the spat between two spouses of former England strikers has brought Twitter to life.

Here are some of our favourite tweets reacting to the bust-up...

Is Wayne Rooney still moving to Derby, or was that just Coleen having Rebekah Vardy on and it's gone too far?— Si Lloyd (@SmnLlyd5) October 9, 2019

Coleen's Vardy statement should be taught in English Lit classes. It sets the scene intriguingly, shifts seamlessly to the hero character's plan, and that final line where the culprit is named via elpisis is some of the punchiest writing I've read.

0 - Despite spending four hours & 22 minutes together on the pitch for England in total, Jamie Vardy and Wayne Rooney never created a single goalscoring chance for one another. Awkward. pic.twitter.com/qS4H1G93nN— OptaJoe (@OptaJoe) October 9, 2019

And finally... check out the real hero of this story (from January)...

UP NEXT: OPINION There's a problem with Gary Neville's analysis of Manchester United

Get 5 issues of the world's finest football magazine for £5 – the game's greatest stories and best journalism direct to your door for less than a pint in London. Cheers!

9 of the weirdest player awards we've seen in football