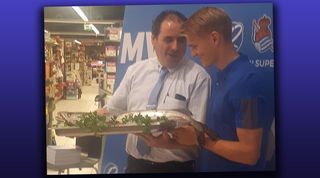 Martin Odegaard has got his Real Sociedad career off to terrific start with two goals in his first five matches, and nobody was surprised when he was named his new club's player of the month.

More were when they saw what he'd been handed for his efforts, though. A sports car? Shiny trophy? Or perhaps just a decent bonus? Nope. Instead, the creative midfielder was presented with a large fish at a supermarket – honouring the San Sebastian club's aquatic heritage.

So we went looking for more oddities...

Footballers are used to getting a nice bottle of champagne for man-of-the-match awards, but that's boring: in South Africa, the only top-up Mamoledi Sundowns player Hlompho Kekana got was for his mobile phone network.

With Telkom as title sponsors for a domestic cup, players are given 5GB of data for being player of the match – leading to several star men looking rather sheepish while receiving a massive SIM card-shaped award. It's better than it looks, though: broadband is notoriously dodgy and expensive in South Africa, making phone data valuable.

I knew this country was rubbish when we gave a man of the match 5GB of data pic.twitter.com/Wfvd3rm5qJ— Trev (@Tokyo_Trev) January 6, 2018

Africa is renowned for its terrific man-of-the-match gongs, and players from Zimbabwe's Premier Soccer League are presented with a crate as reward for their efforts.

You won't be surprised to learn that the league is sponsored by South African company Castle Lager, making recipients of the award particularly popular with team-mates.

Meanwhile, out in Zimbabwe, professional footballers are getting 24 beers as a Man of the Match prize... pic.twitter.com/nLwmUk9p58— Joe Crann (@YesWeCrann) May 24, 2017

In summer 2019, Hassan Kajoke enjoyed a match to remember by scoring two goals in a 5-0 win for Malawi side Nyasa Big Bullets (drink in that team name for a second).

What the striker probably didn’t see coming was a fan presenting him with a live chicken post-match for his impressive performance. For an added touch, the confused fowl was handed to Kajoke in a cardboard box with his name sprayed on it in club colours.

But for Malawi, see also Poland. In August 2018, top-flight side Gornik Zabrze presented their man of the match with a live hen.

adidas' Condivo template is the gift that keeps on giving.... not that different from herpes, except uglier. This is the away kit for Polish club Górnik Zabrze, and no, we don't know why they award their man of the match with a live chicken..... pic.twitter.com/39ca3rjTHh— Club 25 Football (@Club25Football) August 2, 2018

Players often sign autographs and interact with fans after an intense game of football, but being given a food storage solution isn't usual among the post-match festivities.

That's what happened to Arsenal Women goalkeeper Emma Byrne, though, after she'd played a blinder in a Champions League tie against Swedish side Gothenburg. Handy, in fairness.

This awards are a pretty big deal, so UEFA should really create a trophy which matches its importance.

A silver trophy of a player with their arms aloft is a pretty good idea. The only problem is that the European head honchos forgot to give them a head, forearms or hands. We'll take the 24 bottles of beer, thanks.

South African banking company Absa, who sponsor the country’s Premier League, reward men-of-the-match victors with just over £100 of credit. Handy for buying stuff, less so to fit into your pocket.

Thanks to Argentine Premier League sponsors Burger King, Lanus striker Lautaro Acosta was presented with some new barbecue equipment and an apron with his name on it, after winning a player-of-the-match award back in 2017.

When Aberdeen midfielder Stephen Glass set up two goals for the Dons in the 1995 League Cup Final against Dundee, he probably would have been happy with mere folk hero status at the Scottish Premier League side.

What he didn’t expect was to be given a bicycle by comedian Sandi Toksvig, now of Great British Bake Off fame. The young Glass then cycled round Hampden Park in jubilant celebration - as you would.

In fact, the awarding of a bike was annual tradition for the Scottish League Cup in the late-90s. Neil McCann was given a new set of wheels the following year, though he was on the losing side as Hearts were beaten 4-3 by Rangers in 1996. It’s the small victories….

The winner is still of course the best Man of the Match award of all time...the famous round here Stephen Glass bike pic.twitter.com/2nUH3HYVy6— Miles McClagan (@TheSkyStrikers) December 15, 2015

A pair of sandals

To Ghana! And what better way for players to celebrate their success than by slipping out of their boots and sticking on some cool adidas sliders? (See picture No.3)

Man of the match awards in various African countries: