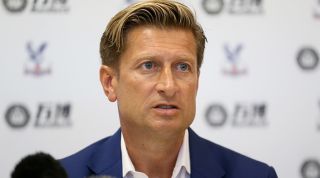 Crystal Palace chairman Steve Parish has identified the club's one and only problem and acted decisively to remove it, meaning that there are now zero obstacles to the Eagles surging up the table to glory.

Parish gave Frank de Boer his marching orders on Monday, having grown impatient with the Dutchman's failure to turn his side into the South London Santos despite everything being perfectly primed for him to do so.

"Every single thing is in place for this club to succeed, from an ambitious wage structure, to an intelligent recruitment policy, to a chairman with a profound long-term vision for success," Parish said.

"It was therefore baffling to me why a squad of square pegs and panic buys wasn't sweeping all before them, and the only explanation is that Frank de Boer is personally and solely responsible for 100% of our problems.

"I have now charged Roy Hodgson with implementing the freewheeling total football that Jason Puncheon, aka the Croydon Cristiano, is just itching to unleash."

Palace fan Lindsey Russell said: "With anyone else but De Boer in charge, we'd have won the league already, broken away to form a new European super league, won that, and turned Brighton into an official feeder club.

"I'm glad the chairman has acted with such characteristic wisdom, and I hope nothing else at Crystal Palace ever changes," she added.

"After all, what could be better than spending every Saturday watching this parade of legends compete to see who can trap the ball the furthest?

"I'm just overjoyed I remortgaged my holiday home in Florida so I could afford a season ticket."

Please note: This satirical news story is not real. Like, clearly.