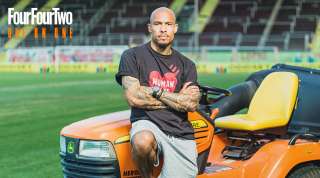 The Johannesburg showpiece, in which Spain eventually defeated the Netherlands 1-0 after extra time, was less than 30 minutes old when the central midfielders clashed on the Soccer City turf.

De Jong’s kung-fu kick only resulted in a yellow card from referee Howard Webb, whose 14 bookings more than doubled the previous record of six yellow cards shown in a World Cup final from 1986.

But the former Manchester City and Milan midfielder insists he didn’t expect to be sent for an early bath, as he only had eyes for the ball and caught Alonso by accident in an 'unfortunate incident'.

Speaking exclusively in the July 2018 issue of FourFourTwo magazine, De Jong says: “I just wanted to play the ball – that was my only focus. I didn’t see Alonso coming because he was on my blind side. I didn’t expect to get sent off at the time because I felt it was obviously an unfortunate incident.

“I was lucky that an English referee was in charge, because he’d seen many hard challenges in the past. I thought he would give me the benefit of the doubt because I put my hands up immediately.”

Alonso had the last laugh in South Africa but De Jong enjoyed a degree of revenge in Brazil four years later, with the Dutch drubbing the holders 5-1 after Alonso had scored from the penalty spot.

De Jong admits that he’s never discussed the tackle with the Spaniard, but believes the incident is now water under the bridge and would be happy to share a beer with the pass master in the future.

“We’ve seen each other but we’ve never spoken about that moment – it’s just a moment in football history,” he says. “We play a contact sport and sometimes you will get a red for a lesser challenge.

“That incident came on the world stage so it gained a lot of attention. Maybe one day we'll see each other, have a beer and laugh about it. Ultimately, he won the game. I think he had the last laugh.”