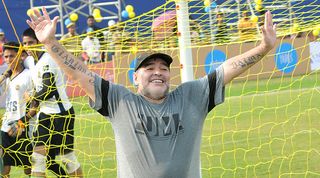 Life is never straightforward for Diego Maradona, who has reportedly been denied a visa to enter the United States.

Maradona was due in Miami to contest a court case against his ex-wife, Claudia Villafane, who he accuses of stealing money from him to aid the purchase of seven different properties in Florida.

According to the former player's lawyer, the US has declined to issue a visa on account of comments Maradona made about Donald Trump on Russian and, more recently, Venezuelan television.

"For me, he's more of a comic," Maradona is reported to have said first. "He's like a cartoon to me, if we talk about politics... Every time I see him on TV, I switch the channel."

Maradona's legal representative Matias Morla says he tried to deter the Argentine legend from passing further comment in his Venezuelan TV appearance – to no avail.

"You can imagine, I was in the embassy and I said 'Diego, please don't talk about the United States'," Morla told Argentine TV show Buenos Dias America. "Because the interview was with TeleSur and I know how these things go.

"And the second question was 'What do you think of Donald Trump'? He said 'Donald Trump is a chirolita (a dummy or puppet)?' After this, I said I'm going to have to represent you in Miami instead."

It's certainly petty enough to be attributable to Trump, but then again, Maradona doesn't exactly have the cleanest legal record. And it's not as if his past visits to the United States have always passed without incident...