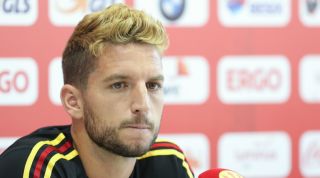 Winning the World Cup would be great in the eyes of the Napoli forward, but he also wants to help his friends out.

Belgian electronics company Krefel have offered full refunds to those who have bought TVs from them during the World Cup should Roberto Martinez's side score at least 16 goals in Russia. Belgium scored nine goals in their first three group games.

And speaking ahead of the Red Devils' last-16 tie against Japan on Monday, Mertens told reporters he holds it as a personal ambition that the target is met.

"My friends bought a television, so I am thinking about that," he said at Belgium's training camp near Moscow.

"With the qualities of Romelu [Lukaku] and Eden [Hazard], we can create a great deal of danger.

"We are doing really well. We like to score a lot of goals."