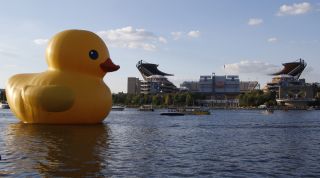 Ozil's excellence got us wondering which other goals had been created with no-touch passes...

Let us start, as fun often does, with a Brazilian. Not just any Brazilian, but Pele, larruping home a free-kick against Romania at Mexico '70 thanks in no small part to his mate Jairzinho falling over and leaving the sort of hole in the wall that goalkeepers hate and builders love.

From Pele to Tim Cahill. Wait, come back! Australia's finest benefits here from the nous of the magisterial Thierry Henry, as the former Arsenal great calmly dummies to let Cahill notch for the New York Red Bulls against Toronto.

Now, far be it from us journalists to be jaded and cynical, but did Edinson Cavani really mean to dummy this Diego Lugano cross, or was it a woefully executed attempt at a Zola-style near-post backheel? Either way, Diego Forlan's finish brought a happy ending to this move for Uruguay against Nigeria in the 2013 Confederations Cup.

No doubt that this was purposeful, from Peterborough's Britt Assombalonga. He steps over Lee Tomlin's cross to set up Tommy Rowe for the finish - and Tranmere for a 5-0 home humbling.

From Rowe to Reus: Borussia Dortmund's Marco steps over a cross, as it's often sensible to do when Robert Lewandowski is stood behind you.

Jo - neither the longest nor the proudest name on Mark Hughes's managerial CV - found much more success back in Brazil, linking up with a certain Ronaldinho at Atletico Mineiro and scoring for them in the 2013 Copa Libertadores final. Three months earlier, this happened.

To Mexico! And why not, if it means we can watch Fidel Martinez scoring thanks to a dummy from Duvier Riascos? It helped Tijuana - go on, play some air trumpet - beat Leon 3-0 in the Mexican League semi-final.

Bored yet? As ever with internet searches, you need the harder stuff. Try the goal 34 minutes into this video of Russia's Paralympic seven-a-side banging in their eighth against the fuming Dutch: Kuligan's free-kick is dummied by Ramanov AND Murvanadze before Potekhin rattles home. Ouch.

One more? OK then. En route to beating Moldova 4-0, Serbia's U17 side score from a corner dummied by not one, not two, but three players before Andrija Zivkovic (now of Benfica) wellies home. Nice work, young Serbs.

RANKED! The 10 best Premier League goalkeepers of all time