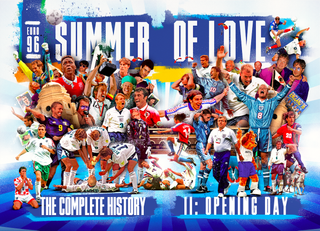 This feature first appeared in the February 2020 issue of FourFourTwo. Subscribe to the magazine now to get a free gift worth £49.99

Every game from Euro 96 in being shown in full by ITV this month. Over the course of May, FourFourTwo will be publishing our complete history of the tournament. This is the second instalment – read part one here...

Pleasingly for traditionalists, the first game of Euro 96 kicked off at 3pm on a Saturday. Less happily, it was preceded by an opening ceremony featuring Mick Hucknall in a grey shirt and even greyer suit, retooling Simply Red’s lift music into the easily (and eagerly) forgotten official Euro 96 dirge We’re In This Together. A better anthem would emerge.

It was a low point in the opening ceremony’s assortment of dancers, medieval jousting, Sir Stanley Matthews, the Red Arrows, 40,000 balloons and a 30-foot inflatable version of what everyone was theoretically here for: the Henri Delaunay Trophy. Also mooching about was leonine tournament mascot Goaliath, the sanitised son of 1966’s World Cup Willie.

Meanwhile, England were preparing for their first competitive match in over two and a half years, since a fruitless victory over San Marino signalled the end of Graham Taylor.

“There were a few nerves in the dressing room,” Paul Ince tells FFT. “It’s your home tournament and you haven’t won for 30 years.” England, for all of their tactical fluidity under Venables, lined up in a 4-4-2.

They started well, then scored, Pauls Gascoigne and Ince combining to create Alan Shearer’s first goal in 12 caps. “It was a case of, ‘Thank God for that’,” laughed Shearer. Some in the press had been pushing for the Geordie to be replaced by Liverpool’s mercurial Robbie Fowler, coming off successive 30-goal seasons, and Les Ferdinand was also in the squad following two similarly impressive campaigns. “The best thing Terry did to me, about a month before,” said Big Al, “was to take me to one side and say, ‘You’ll be starting – you’re my centre-forward’.” The gaffer later told FFT, “There was no doubt he would play. He was, quite simply, a goalscorer. You can never leave out a player like that.”

But the goal didn’t relax the Three Lions, as the Swiss refused to roll. Kubilay Turkyilmaz skinned Stuart Pearce and crossed for Marco Grassi to somehow hit the bar from four yards out. Then England inexplicably froze in the second-half heat. “It was a very sticky pitch and we couldn’t pass the ball as well as we wanted,” explains Teddy Sheringham. There were internal factors, too. Ince suggests, “It was important to start well – we knew that if we lost the first game, they’d always revert to the dentist’s chair.” In all, six yellow cards were given in a nervy, if entertaining, match.

With 20 minutes to go, Venables sacrificed Sheringham and Steve McManaman for Steve Stone and Nick Barmby, in a 4-5-1 intended to stifle. But it didn’t work. Johann Vogel whistled one past the post, before referee Manuel Diaz Vega whistled for a penalty after Grassi’s shot hit Pearce’s arm. Turkyilmaz made no mistake. “It’s quite a funny feeling when the opposition equalise,” notes Sheringham. “It drains you.”

Late on, up went the newfangled electronic board for England’s first-ever third substitute in a competitive game (the rule was changed in 1995). David Platt replaced fellow Italia 90 hero Gascoigne, and the knives were drawn.

Drawing a line from what Bobby Robson had called Gascoigne’s “refuelling” issues, the Sun and Daily Star headlines read: ‘OUT OF GAZ’. Beneath the headline ‘GAZZA MUST GO’, the Mail’s Jeff Powell insisted, “England must sling out Gascoigne on his earring. They must devise a way to play without this playboy relic of what once might have been a great playmaker.”

So, would Gazza keep his place to face Scotland?