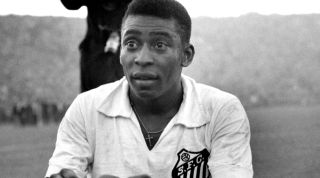 To say Pele’s potential was obvious from a young age would be an understatement: when Waldemar de Brito took him to Santos, he told the directors that the modestly built 15-year-old would be “the greatest football player in the world”. No pressure, then. But Pele didn’t disappoint.

When he arrived in the industrial port city, 50 miles from Sao Paulo, the club was already on the up. Pele sent them into orbit. He was top scorer in his first full season and Sao Paulo champion in his second. Nine more state titles followed, along with five national and two South American titles.

When Santos won back-to-back Intercontinental Cups against Benfica and Milan in 1962 and 1963 respectively, Pele scored seven goals across two two-legged ties. Pele didn’t make Santos, Pele was Santos. And he loved Santos too…

What kind of club was Santos when you joined in 1956?

"Santos at that time started to grow. They had a very good base and gave an opportunity to the youngster. That was why I played in the first team very early.

"I had invitations to go to Rio de Janeiro and Sao Paulo to try to be a professional with the big clubs there, but Santos was the young team who started to bring through the big names, and all of sudden there was a lot of us because everything started to come together."

Was there a moment when you knew you belonged in professional football?

"When I was in Santos for some months we played against Corinthians – not the team of the first division from Sao Paulo but in the second division, from a town called Santandre.

"I played after half-time and scored my first goal. I will never forget it – it was one of the most important moments in my career."

Within a year or so, you were a big star and had won the World Cup. How much did life change in such a short space of time?

"After my second year at Santos, it was very difficult to go out like before because I was 17 years old and had played at the World Cup. My first game in the national team was at 16; it was against Argentina in 1957 and I scored in a 2-1 loss [becoming the youngest player to score in international football].

"People went crazy because it was not normal at the time. Now, they are more used to seeing youngsters because of television. They score one goal and all over the world everybody sees it and knows the player. At that time it was different; people were surprised because I was so young.

"Every place I went, people asked, 'How could this young boy play for Brazil?' I wasn’t too strong back then but I was intelligent. Things have changed. Today, youngsters have more opportunity, but they also have more support."

How did your Santos team-mates treat you when you returned a world champion? Was there any jealousy?

"No, no, they started treating me better! We had three players in our team who were at the World Cup. There was Zitho in midfield, and Pepe, who went but didn’t play. Then the Three Musketeers were back together."

Is it true you joined the army for a year on coming back from the 1958 World Cup?

"Yes, when I turned 18 in October 1958 I went to do national service and it was fantastic. If I could I would tell my son and all the kids to go to the army, because you learn a lot.

"For me, it was a good experience because I had become champion of the world, came back and said: 'OK, now I’m gonna be free!' But my friends in Santos said: 'No, you have to be an example for the youngsters now – you have to go to the army.' So I did.

"I learned how to cook, how to respect people, how to wash things, dress, iron, everything. It was fantastic. A lot of work you do for survival, in the jungle. But the most important thing it taught me was discipline and that helped me in football, no doubt. It was a good time in my life."

You turned down a move to Europe several times to stay at Santos. What was it about the club that made you so happy that you never wanted to leave?

"At that time we didn’t have too much exchange of players – very few went to play abroad.

"Then, we were like a family: the same players together for three, four, five years. Why would you want to change for a little more money? After 1968, I had offers to go to Europe, to Mexico… but I said: ‘No, it’s OK. I’m with Santos. I don’t want to change.’ Even when I retired from Santos, I had proposals to go to Inter Milan, to Real Madrid, to Juventus, because by the ’70s a lot of players from Brazil had started to go to Europe, but I always said no.

"I think to be as a family is the most important thing. I knew all the players there, my family was there – I never wanted to change. I only moved to play with New York Cosmos."

This feature originally appeared in the November 2010 issue of FourFourTwo magazine. Subscribe!