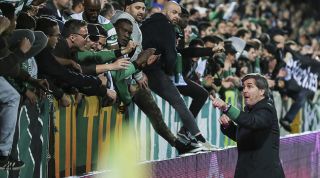 Around 30 kilometres east of Lisbon, lying among oak trees in the dusty Alcochete countryside, you'll find the Alcochete training complex of Sporting Clube de Portugal. Despite the unpretentious setting, it’s a football academy that's acquired worldwide fame and the only one that can boast two Ballon d’Or winners among its alumni: Luis Figo and Cristiano Ronaldo.

On the afternoon of Tuesday May 15, as the senior squad prepared to train ahead of Sunday’s Portuguese Cup final against Desportivo das Aves, the usual tranquillity of the bucolic surroundings was suddenly and violently shattered.

A group of 50 masked Sporting ultras armed with metal bars and wooden clubs stormed past the single security guard, made straight for the first team’s changing rooms and attacked the club’s coach Jorge Jesus, his assistants, the players and other staff. Star striker Bas Dost was left with a badly gashed head. Soon afterwards, shocking images of the Dutchman’s wounds and the trashed changing room immersed in smoke started circulating around the internet.

Defeat against Maritimo on the last day of the Primeira Liga season on Sunday had meant Sporting missed out on Champions League qualification. Shortly after the final whistle blew in Madeira, Sporting’s players were subject to heckling and insults from the club’s irate travelling supporters. But nobody saw this coming.

“We’re in shock. I feel empty,” Dost told the Dutch press. The shock was shared by the entire country. The government hastily organised a press conference condemning the attack, saying violence had no place in sport and guaranteeing reinforced safety at Sunday’s cup final.

Later in the evening, hundreds of Sporting fans made their way to the club’s Alvalade stadium in the capital to make it clear to the players that the club’s real fans were disgusted by the attack, with huge banners of Dost and the Netherlands flag on show.

President in the eye of the storm

It was the second time that Sporting had made global headlines for all the wrong the reasons in little over a month. It’s also impossible to disassociate the troubles from its firebrand president, Bruno de Carvalho (below), himself a former member of Juve Leo, the ultra group thought to be behind Tuesday’s attack.

Carvalho was swept to power in March 2013 elections on the back of a promise to make Sporting relevant again, after years of living in the shadows of Porto and Benfica.

He immediately set about attacking every individual and entity he perceived to be preventing Sporting from recapturing its past glories. His fiercely confrontational methods led to heightened antagonism between the Lions and city rivals Benfica, who he has accused of bribery and corruption on almost a daily basis.

The bad blood between the clubs was further exacerbated after Carvalho wooed Jorge Jesus (below) – the most successful coach at Benfica for decades – from the red half to the green half of the city in a sensational 2015 swoop.

The enmity between the clubs reached unprecedented levels, and in 2017 an Italian Sporting supporter was killed after a late-night fracas between the two sets of fans on the eve of the Lisbon derby.

There is always a bubbling undercurrent of tension among Portugal’s top clubs, but the perpetual suspicions and constant accusations of corruption have fuelled an increasingly bitter animosity and led to an especially toxic climate in recent times. Carvalho’s detractors flatly blame Sporting’s president for fostering an explosive atmosphere.

Yet that view is (or at least was) considered overly simplistic and generally not shared by most Sporting fans. Carvalho’s backers fervently support his fearless crusade to topple the status quo, insisting that the pro-Benfica media makes him the scapegoat for all of Portuguese football’s ills.

Indeed, Carvalho has enjoyed virtual unanimous support among the Sporting fanbase since becoming president of the club five years ago. He was re-elected for a second term with 90% of the vote, has breathed new life into a failing institution, sorted out the club’s finances and made the team more competitive, albeit without delivering the desperately desired Portuguese title – a trophy that has eluded the Green and Whites for 17 years.

This support for Carvalho, however, was severely dented in early April. Despite a spirited performance, Sporting lost 2-0 to Atletico Madrid in the first leg of the Europa League quarter-final in the Spanish capital.

Losing somewhat unluckily to the tournament favourites in the away leg should not be seen as a disaster. Carvalho, however, couldn't contain his annoyance at the result, posting a message on Facebook fiercely criticising centre-backs Sebastian Coates and Jeremy Mathieu for mistakes; Gelson Martins (below) for failing to take a chance when clean through;, as well as Fabio Coentrao and Bas Dost for collecting yellow cards that ruled them out of the second leg.

The following day, 18 senior players shared a message on Instagram expressing their disapproval of the public criticism and “the absence of support from he who should be our leader”.

Carvalho’s reaction? He got straight on Facebook again, accusing the players of acting like spoiled children and immediately suspending all of them, only to delete the post shortly afterwards. Caught in the crossfire, coach Jorge Jesus attempted to mediate, giving his full public support to the players while refusing to openly criticise the president.

A stand-off and uneasy peace between the two sides ensued. Performances and results even improved, and a second-place finish looked to be on the cards. But last weekend’s defeat saw Sporting finish the season in third place and triggered another round of destabilising events.

On Monday, a series of emergency meetings were held between Carvalho, the coach and the players, with rumours initially suggesting that Jesus had been suspended. The president immediately rubbished these reports, confirming Jesus would take charge of the team in the cup final, and again lashed out at the media, accusing them of inventing stories to undermine the club.

He added that the meetings were held as a natural consequence of the weekend defeat that had cost Sporting many millions which they were counting on in their preparations for next season.

In the wake of the bombshell that occurred the next day at Alcochete, that money could pale into insignificance compared to the consequences of the ultras attack. The press has been rife with stories suggesting that the players are legally within their rights to walk out of their contracts owing to unsafe working conditions to practise their profession.

All eyes on Jamor

Alex Ferguson at Mexico '86: when the world got its first blast of the hairdryer

The next episode in this stranger-than-fiction soap opera plays out on Sunday, as Sporting face Aves in the Portuguese Cup final.

Staged in the spectacularly beautiful setting of the Jamor national stadium, situated in the middle of a pine wood on the outskirts of Lisbon, the match is traditionally a festive affair to bring the curtain down on the season.

This year, unfortunately, the football is almost a secondary consideration. The occasion will provide a good barometer of whether Bruno de Carvalho has any lingering support. And as this week has proved, tranquil surroundings offered by nature are no guarantee of avoiding a storm when it comes to Sporting Clube de Portugal.