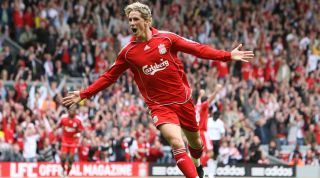 This interview is from February 2010.

Liverpool, August 19 2007. Fernando Torres is just 15 minutes into his Anfield debut when Steven Gerrard plays the ball through. Sprinting onto it, he slows briefly before gliding past Chelsea defender Tal Ben Haim and into the penalty area, slotting the ball beyond Petr Cech and into the net.

As he slides across the turf, Sky’s commentator shouts: “His first goal on his Anfield debut – and scored in style. You could never get a bigger stage to make a first impression.” All around the stadium, celebrating fans hope it will be the first of many; down in the corner, Torres knows it will be. Yes, knows.

“When I scored against Chelsea, I knew right there and then that I would get more than 20 goals that season,” he insists. It is a striking statement and yet he says it with such characteristic, quiet conviction that it brokers little argument. Besides, when FourFourTwo meets him two and a half years later, it sounds logical enough. One hundred games and over 60 goals into his Liverpool career, Torres boasts a better ratio than Robbie Fowler, Michael Owen, Ian Rush, Kenny Dalglish or Roger Hunt. Him scoring feels inevitable: of course he was going to get over 20; he was always going to get over 20.

Only he wasn’t. It is a big claim; for those who watched him in Spain, it is an incredible one. The Spanish knew he was good but they didn’t know he was quite this good. No Liverpool player had scored 20 league goals since Fowler over a decade before and, while he could do wonderful things, Torres stood accused of missing chances. He had never scored 20 league goals in Spain. Of his career-best 19 in 2003-04, six were penalties; from open play he twice scored 13, once 12 and once 10 in the previous four years. “If Liverpool see in Torres a man who will get them 20 goals a season, they may be disappointed,” ran one profile.

It is an impression that Torres accepts, maybe even shares. There is no a flicker of irritation, no flash of indignation, when FourFourTwo admits its doubts back then. “I’ve been surprised with just how well things have gone too,” he says, “especially in that first season, which I expected to be transitional.” But, he adds: “When I scored against Chelsea I knew.”

Why? Were English defenders really that bad? “No,” he smiles, quickly expressing his admiration for John Terry, Rio Ferdinand and the rest. “Because I was so confident and comfortable: I could see that I was part of a very well organised team, I could already see that the style of football suited me and that I would get lots of chances. My qualities suit the English game better; it’s quicker, more dynamic, it’s more about speed and sharp, almost isolated moments. English football seemed made for me.

“It’s much more direct, there’s less build up. In Spain it’s slower, there are more touches on the ball before you get to the opposition’s penalty area; in England it’s all power, pace. And that suits me much better.”

So much so that Torres has no plans to return home. “I’ve improved a lot,” he says. “But I think that my qualities mean that I would always play better in the Premier League than in La Liga.”

The plan to turn Torres into the most coveted frontman in world football began the first day the Spaniard set foot in Liverpool. “Pretty much the first thing Rafa ever said to me was: ‘Get yourself to the gym’,” Torres reveals. “However strong you think you are, the centre-back here is going to be stronger. They’re 1.90m, 90 kilos. The stronger you are, the better chance you have of getting to the ball first.”

Torres did as he was told. Torres always does what he is told. And that is the point. It is not just about changing countries; he has changed his game too. He has improved. And as he talks, there is a recurring theme. Torres is a perfectionist, he believes in details. The results have reinforced that belief. So too, of course, has his coach.

“The vast majority of footballers stop learning once they become professionals,” he states. “And that is their big mistake. I’ve been lucky enough to have coach like Rafa Benítez who tries to make you better every single day. There’s no doubt I’ve improved a lot.”

Torres is the embodiment of practice makes perfect; if the devil is the details so too are the goals. “Things that you would never even have thought about, Rafa does,” he says. “Things that you thought weren’t important are. You might think ‘that’s ridiculous’ but the thing is the proof is there in front of you. You try it and you see that it’s true. It really works.

“When I met Rafa I realised maybe for the first time just how important a coach is. He’s not just someone who sticks 11 people on the pitch and chooses a system. He has to get the very best out of every player and every player is different. Some players have to be pushed and piqued, others have to be looked after,” he says. “When I’ve scored two goals or three goals, he tells me I’ve played badly, that I didn’t help out at the back…”

The question is inevitable: isn’t that tiresome? Plenty of players have been burnt by Benítez. “It depends,” Torres replies. “You can think, ‘forget it’ or you can think, ‘next time I’m going to work twice as hard, I’m going to do the things he tells me to do and then we’ll see what he says’.” There is a grin. “But if you do that he still has things to say! ‘In that corner, you let your man go and he had a shot…’ He always demands more.  Maybe there are players who get sunk by that but personally it helps me.”

Nor is it all about motivation; in fact, says Torres, it is more about method. “People say things like: ‘he’s got to improve his shooting’ but that doesn’t mean anything. You have to look deeper than that; you have to focus on how you get into the position to shoot, your arrival point, the position of your body. To say ‘he’s got to shoot better’ is banal, so general as to be meaningless. How do you find the space? How do you get into that position? How do you finish? In what way?

“Rafa talks to me a lot about the position of my body. If you’re turned fractionally more to the right or left you might get a millisecond’s advantage; if when you receive the ball you shift you weight you can get away easier. The way you position yourself against the centre-backs, focus on their position and judge their movements as well as your own is vital. One of the most important things I’ve learnt with Rafa is how to play closer to the opposition’s penalty area – how to get in behind the defenders as a solo striker. I don’t have to come back and look for the ball; I fix my position by the centre-backs more than by the ball or the build up.

“Rafa always analyses the centre backs I’m facing and the goalkeeping coach tells me about the goalkeepers. In a game it’s a matter of tenths of a second and that information can help. You might be told: ‘The goalkeeper always dives one way and if you’re patient you can wait and go round him the other side, the goalkeeper comes out a long way and you can chip him…’ Those small details really helped, especially in the first year when I didn’t know the players, whether centre-back was quick or slow, whether he comes across to the wings to cover and leaves space behind or whether he sticks.”

If Torres has benefited from Benitez’s obsession with detail, so too has Steven Gerrard. The differences between playing with Gerrard for Liverpool and David Villa for Spain are striking. “Gerrard is a midfielder who goes from back to front, Villa a striker who makes the opposite move,” Torres explains. “With Spain, I’m more involved in the build up. I see more of the ball but in different positions. With Gerrard I am more of a reference point; with Villa, my position is constantly switching. With Spain it is more important for us to have the ball, to tire the opponents out, to seek small spaces; with Liverpool we’re more direct.”

The result has been fewer goals for Spain but even for Liverpool, Torres admits that there are some games when he knows that he isn’t going to score, for one simple reason: he’s not supposed to.

“The tactical work we do starts at the beginning of the week; our training is tailored according to the other team, focusing on switching play to try to draw them out, finding spaces. In England, lots of teams have centre-backs that man-mark you. Often my job will be to bring that centre-back out with me and leave one there isolated on his own so that Gerrard go against him. My movement will be tailored to making space for Gerrard, or Kuyt or Benayoun. I’ll go into that game knowing that it’s very unlikely I will score because on that particular day scoring goals is not my job.”

Mostly, though, it is his job. “In the end, the one thing that survives forever are the stats – how many goals you have scored in how many games.” And in those stats there is much of Benítez’s work in Torres’s lasting legacy. “Sometimes the things you work on are things you can’t even see, but you realise when you try it that each little detail Rafa works on with you might be three or four more goals a season. Three or four more goals a season for every little detail he teaches you might be another ten or eleven goals and suddenly you’re scoring 30 goals a year not 20,” he says.

But then, as Torres admits with a smile: “All the preparation in the world doesn’t mean you have everything covered. Often games are won by a moment’s inspiration – precisely because you have done something that breaks with what everyone expected. Including your coach.”