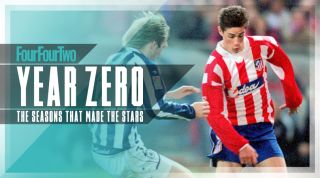 At Christmas in 2001, Fernando Torres was asked to do a photoshoot in Plaza Mayor and Puerta del Sol, two of the busiest squares in Madrid. He was 17 and had played for Atletico Madrid’s first team for about six months, which he felt was enough to merit the kind of fame that gets you surrounded by people in public.

“Are you mad?” Torres asked when the press officer explained the request.

The press officer was right. Torres went to the popular squares, posing for photos near Christmas stalls and landmarks heaving with tourists. Nobody bothered him.

But that would soon change. About a year later, Torres could barely leave his own house. By then, Atletico had returned to La Liga, and the innocent-looking, freckled striker was toying with some of the meanest teams in the division. People thought he was good, but not this good. Almost overnight, El Niño became one of the hottest talents in Europe. “In four matches,” he later wrote, “I went from a virtual unknown to a player people were talking about.”

It is worth recalling the extraordinary circumstances in which Torres emerged. In 1996, Atleti pulled off a sensational Spanish double, only to suffer a shock relegation four years later. A strong side were already floundering under Claudio Ranieri when owner Jesus Gil got arrested and suspended over tax evasion and misuse of club funds.

The club entered administration, Ranieri resigned and the team slipped into the second tier for the first time in 65 years.

The descent must have distressed Torres, who'd joined the Atleti academy at 13 and been a fan ever since his grandfather took him to the Vicente Calderon. But in May 2001, that “year in hell” as Gil called it, gave Torres the chance to make his first-team debut against Leganes. “If Atletico Madrid hadn’t been in the second division,” Torres said, “I am sure it would have taken longer for me to get a chance.”

As it was, Atleti narrowly missed out on promotion that year. The next season Torres became a regular, though with six goals in 36 league games it was little wonder he was left in peace in public. Still, Atleti got promoted under Luis Aragones in 2002.

That summer, Torres was followed by several clubs. In July, he had fired Spain to victory at the U19 Euros in Norway, becoming top scorer, player of the tournament and match winner in the 1-0 final win against Germany.

Yet La Liga was a tougher test and many wondered how he and Atleti would fare. They had a strong squad, featuring goalkeeper German Burgos (now Diego Simeone’s assistant at Atleti), future Newcastle defender Fabricio Coloccini and Liverpool favourite-to-be Luis Garcia. A 2-2 draw at Barcelona on the opening day suggested they would do more than just battle relegation.

In the second round of fixtures, Torres struck his first Liga goal in a 1-1 draw with Sevilla. He then marred the occasion by getting two late yellow cards for simulation. To his relief, the federation rescinded one of them, letting him off the hook to score twice against Mallorca. Winners at home to Betis and Valladolid followed and, by mid-December, his goals had lifted Atleti to seventh.

The kid clearly knew how to play. Yet he had still not delivered the kind of landmark performance that would hoist him to superstardom. Not yet, anyway.

On January 12, Deportivo La Coruna faced Atleti at the Calderon. The Galicians may not be title contenders these days, but at that time they were formidable opponents, having won La Liga in 2000 and finished runners-up twice since. On this occasion, the score stood at 1-1 on 76 minutes when Torres received a long ball down the right.

What followed was a pierce of art. Controlling the ball, Torres hooked it into the box around defensive stalwart Noureddine Naybet, picked up possession on the other side and fired an angled shot towards the far top corner. Golazo.

Naybet had hardly caught his breath when Torres popped up again to terrorise him with another blistering run that set up Fernando Correa for 3-1. They were two pieces of individual skill that showed what Torres was all about: directness, raw pace and audacious dribbling.

About one minute in

The reaction was immediate. El Pais hailed Torres as the future of Spanish football and called him the most exciting newcomer since Raul. Diario AS compared him to Marco van Basten.

The media storm was gathering force. Ahead of the Madrid derby, the Atleti press department received more than 40 interview requests for Torres alone. As it was, he did little against Madrid and Real Sociedad – but then Barça rolled into town.

Cue another dazzling display. Just before half-time, Torres got the ball near the box, left Frank de Boer for dead and finished coolly. It was a sublime solo goal that set the tone for a 3-0 win, and now the plaudits were raining down. As Diario AS wrote, it was no longer possible to doubt that Torres was the real deal; only an 18-year-old of extraordinary ability could terrorise Depor, then repeat the trick against Barcelona in the space of four league games.

For his part, Torres now felt the fans really believed in him. They were not alone. Magazines and newspapers wanted him on their covers. In public, his fame turned trips to cafes and cinemas into taxing missions. “I seemed to be taking off,” Torres recalled.

Torres would score only three more league goals that season. An injury struck him down in April, so he finished with 13 goals in 29 league games as Atleti slipped to 12th. Yet nobody doubted his quality.

Barcelona and Milan were rumoured to be interested in him, while in May, reports emerged of a Juventus offer that involved €15 million plus Uruguayan striker Marcelo Zalayeta. In July, new Chelsea owner Roman Abramovich reportedly launched a £28m bid.

All advances were rejected. Torres stayed, became club captain early next season, aged 19, and soon made his senior international debut. Come Christmas, there was no longer talk of photoshoots in Plaza Mayor. Those two goals against Depor and Barça had changed his life for good.