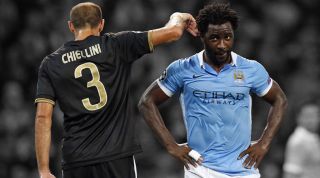 Jose Mourinho gave Juan Cuadrado just four starts in his first six months at Chelsea, even though the Blues paid just over £23 million for him in the winter transfer market. “He needs time to adapt to the Premier League,” Jose admitted.

So it was quite surprising to see the Colombian loaned back to Italy this summer, although the circumstances mean that Cuadrado can find his rhythm once again.

He might not have got much of an opportunity at Stamford Bridge, but the Colombian was determined to show he can exhibit his skills on English soil in Manchester. The winger looked energetic and lively throughout, while his work rate caused Aleksandar Kolarov continuous problems in this encounter.

His falling Rabona flick into the path of Mario Mandzukic was met with gasps from the crowd early in the match, and he almost gave Juventus the lead when Paul Pogba's header was ruled out for offside. Cuadrado performed well while giving a sense that there’s still more to come. For all of his aptitude he can still become more of a goal threat and beat his full-back more regularly, but it’s still a huge improvement.

In stoppage time he received a stern telling off from Juventus coach Massimiliano Allegri, as he argued with fellow team-mates. “As far as I’m concerned Cuadrado is a fantastic player,” confessed Allegri in the post-match press conference. “He needs to challenge himself, I think we all have to challenge ourselves.”

It was only his third appearance in the competition, but Wilfried Bony didn't look comfortable leading the line. His first touch was poor and his link-up play often failed to reach the intended target.

While he didn't get lots of service from his supporting attackers, the Ivorian should have still made better use of the chances that were created. When opportunities did come his way, Bony snatched at them and failed to make adequate contact. He could have also made better use of his physicality against Juve's defenders, although he did make his presence known aerially.

When asked if his team struggle in attack without Sergio Aguero, manager Manuel Pellegrini replied: “No, I don’t think that the result today is just from one player. Sergio will always be a very important player for us, but I think that we played better than Juventus and I never felt that we had problems with them.” Aguero came off the bench with seven minutes remaining, but Pellegrini will privately be a little concerned that his side don’t have enough reliable firepower without their Argentine talisman.

Juventus have arguably had Europe's best midfield for the last two years, with their possession rate increasing under the guidance of Allegri. However, the sales of Andrea Pirlo and Arturo Vidal have left a gaping hole. They are currently suffering from injuries to Sami Khedira and Claudio Marchisio, which has meant a large emphasis on Paul Pogba to carry the burden of expectation. Against Roma they were easily outplayed, while they've failed to win any of their opening three games in Serie A.

It was expected that Juve would deploy a diamond midfield, but Allegri opted for his third different formation of the season with a 4-3-3. New signing Hernanes dropped deeper to support Pogba, with Stefano Sturaro anchoring the trio. “I have to make the most of the players that I’ve got available to me, regardless of the shape we adopt, and get a good result,” said Allegri.

They certainly weren't overrun by City and showed promising signs of beginning to impose themselves. It will take time to form a new cohesive unit, but there has been a progression on previous outings.

The game may have featured midfield heavyweights Yaya Toure and Pogba, but it was the Brazilian Fernandinho who shone brightest, completing more passes and more tackles than anyone else on the pitch.

City have faced a stream of criticism in the past over their ability in the centre of the pitch, which prompted the acquisition of Fabian Delph (who then got injured not once but twice).

But Fernandinho is now showing why the Cityzens paid £34 million for him from Shakhtar Donetsk last summer. He came close on a couple of occasions when shooting from distance, while his important interception on Sturaro denied his opponent an almost certain goal. The Italian youngster had seen his initial effort saved by Joe Hart, before Fernandinho expertly used his body to rebuff the follow-up.

Consistency in his all-round execution will now be key for the 30-year-old, as he has already produced goals against Chelsea and Watford this season.

Not content with netting the equaliser in last season's final, plus strikes in both semi-finals against former club Real Madrid, Alvaro Morata added the Etihad Stadium to his list of vital conquests. The Spaniard played wide left, with the simultaneous tactical responsibilities to track Bacary Sagna and join Mandzukic in attack. It was a profound display when you consider that it was just his second game since he returned from injury. His left-footed winner was expertly accomplished in the 81st minute, giving Joe Hart no chance. “Carlos Tevez often tells me that Italy is like university for strikers,” Morata told Gazzetta dello Sport earlier this year. His graduation has been confirmed with his achievements in Europe's premier tournament.

If he continues in this manner it would be bewildering if Madrid don't activate the buy-back clause in his contract at the end of the season. Mandzukic may have also got himself on the scoresheet, but it will be Morata who gives the forward line the dynamism that has been lost with Tevez's exit.