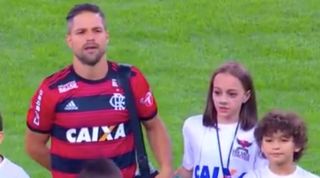 Ilana had recently been diagnosed with cystic fibrosis, but that didn't stop Flamengo from giving her the opportunity to be a matchday mascot at the Maracana ahead of their clash with Sao Paulo on Wednesday night.

Before the game, the 32-year-old – formerly of Werder Bremen, Juventus, Wolfsburg and Atletico Madrid – entered the pitch holding Ilana's hand while he supported her breathing.

Both teams sung the national anthems, giving Ilana a moment to soak in the atmosphere ahead of the Brasileiro Serie A fixture. Lovely stuff.

In case you were wondering, Sao Paulo won the game 1-0.