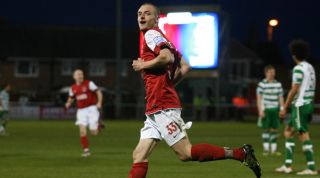 In the 2011/12 season, Vardy scored 34 goals in 42 appearances for the Cod Army to help them achieve promotion to the Football League.

Vardy spent just the one prolific season at Fleetwood before making a £1m move to Leicester in the summer of 2012.

Now the League One club are preparing to host the 2016 Premier League champions at Highbury Stadium – and one pub is hoping to make Vardy's return extra special.

The Stawberry Gardens Pub are releasing a limited edition 'Vardy's Return' ale for fans to consume ahead of the FA Cup third-round clash in Lancashire.

The pub's manager, Billy Melvin, believes Leicester's players and fans arriving on their doorstep will have a positive effect on the seaside town.

“The pubs, takeaways and shops in the town will definitely experience an economic boost from such a big game taking place,” Melvin told i News.

“The whole town is buzzing about it and Jamie Vardy’s return. We owe Jamie a lot in Fleetwood and naming an ale in his honour was the least we could do.

"It’ll be great to get the chance to welcome him back.”

Vardy has been battling with a groin injury that forced him out of last weekend's win over Huddersfield, though, so looks a doubt to feature against his old club.