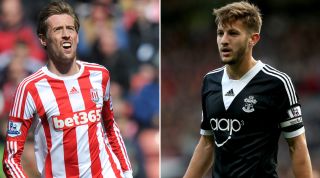 A game of football between two football teams.

By a quirk of the fixture mega-computer, both sides come into the match as the last two visitors to Old Trafford. And those games against Manchester United hint at the relative strengths and weaknesses of both sides and their respective ambitions for the season.

After earning a well-deserved draw courtesy of a late goal and their much-talked about angry high-pressing strategy, Southampton look set to continue mixing it with the top team on the pitch and in the league table. Stoke, on the other hand, offered the sort of plucky but futile resistance demonstrated by most teams whose primary aim is ‘not to get relegated’.

Perhaps the biggest take-away from that defeat for Mark Hughes concerns playing style. Prior to their match against United, where they scored twice, Stoke had failed to hit the target in three games, equating to the Potters' worst start to a Premier League campaign since their post-promotion season in 2008/09. The difference against United? They reverted to type and weren’t afraid to go long. Of the game's top 24 pass combinations, 23 belonged to Manchester United players, one to Stoke: Begovic to Crouch. And it worked (to a point). Against Southampton and their remorseless hectoring, it might be wise for Stoke to once again invoke the spirit of Tony Pulis and take to the air. Cause if you can’t go through them…

Southampton will arrive at the Britannia in a confident, almost cocky mood. That’s because they seem to travel everywhere in confident, cocky mood, demonstrating the swagger of a side that knows it’s good away from home. With a draw at Old Trafford and win at Anfield, plus the second best defensive record in Europe’s top leagues, who can blame them?

Mauricio Pochettino’s side certainly look difficult to beat, if a little pedestrian up front: despite being bottom of the table after nine games last season, the Saints under Nigel Adkins had scored 14 goals. They’ve got 10 so far this term. That they’ve conceded 23 fewer goals, it’s unlikely Pochettino will tamper with the team balance at this stage away from home, where they’re not expecting to take the attacking initiative. All of which is bad news for Stoke.

For Stoke Robert Huth is out, but Marko Arnautovic is back after featuring in the penalties win against Birmingham in midweek.

The only injury concerns for Southampton are Steven Davies and Pablo Osvaldo, who face late fitness tests ahead of the game.

When the Austrian berserker, once derided by Jose Mourinho as having the attitude of a child, was taken off just after half time at Old Trafford due to illness, Stoke’s chances of getting anything from the game seemed to go with him. As well as his sweetly stuck free-kick, Arnautovic offered his side a tricky, jinking outlet that carried the ball up the pitch and away from danger. Mark Hughes admitted as much after the game claiming that they lost the ability to "take the fight to United" in the second half. And we all know what happened next.

What the Welshman didn’t mention was his defensive contribution, with Arnautovic recovering the ball five times for his side; a sense of defensive responsibility that suggests he has grown up since his tutelage under The Special One. Hughes will be hoping his ever-maturing maverick forward is available for the whole game. They’ll need him. That said, the unfortunate Austrian needs a win himself (see Facts and figures).

If you’re desperately scrabbling around trying to find a loose association between Mark Hughes and Mauricio Pochettino (which we are, since they’ve never faced off from the dugout) then you could say the Argentine’s fledging managerial career bears some resemblance to the start made by the Welshman.

Following an impressive debut with the Wales national team, Hughes took over at a struggling Blackburn side and in a single season took them to a sixth place finish in the league, beating the like of Chelsea, Manchester United and Arsenal on the way to a place in the UEFA Cup. Much of this success was down to some nifty manoeuvering in the transfer market, having signed David Bentley, Roque Santa Cruz and Christopher Samba (when they were good) for nominal fees.

Pochettino appears to be having similar success in his second gig as gaffer, squeezing the most of out steady if not spectacular playing staff.

Other than that, they have nothing in common.