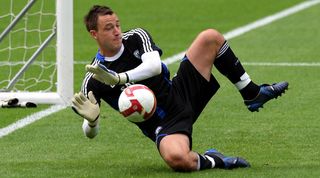 Blues icon Lampard has been giving us the lowdown on his team-mates in a new FourFourTwo video – from the latest (for training) to the greatest (moaner). As you might expect, Lampard plumps for his long-term captain, leader, legend in several categories.

“I’m mentioning John too much,” he chuckles as he picks out JT for hardest trainer and toughest tackler – but also admits his old mucker loved playing in goal.

“We would go to warm up, John would go in goal and we’d all smash balls at him for 15 minutes before training started… He’d get the gloves on and do it properly. He was actually pretty good!”

However, even Lamps’s praise doesn’t stretch to calling Terry his most talented team-mate. That honour he saves for the magical Eden Hazard.

“I was fortunate enough to play with [Gianfranco] Zola when I first got there; players like Joe Cole had tremendous skill,” he says. “But I think Eden Hazard – as in skill that he took onto the pitch and could do magic out of nowhere – he was the outstanding one.”

High praise for the boy Eden considering some of the players Lampard has lined up with.

Now hit play on the above to discover who Lampard rates as the club’s biggest joker, worst trainer, who he’d most want on his five-a-side team – and more.

BT Sport is where the best in domestic and European football go head to head, with live coverage of the Premier League, Emirates FA Cup and as the exclusive home of the UEFA Champions League and UEFA Europa League. For more information, visit http://sport.bt.com/