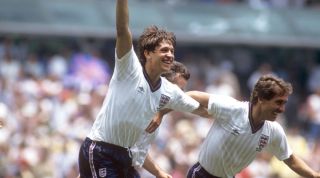 What was it like to play in your first World Cup?
I felt good on the way to Mexico. I’d had a decent run of goals and we had a great team, although I couldn’t have known how much life was about to change. My Dad had a bet on me at 14-1 to be top scorer, and I’d looked at him like he was a madman.

I’d never been so far from home, and I felt nerves and excitement. We did some altitude training before the tournament and then played Canada, which is where I picked up the wrist injury. It was the most painful thing I’d ever experienced. I thought my World Cup was over, but it turned out to be a small fracture. There’s a tiny cast under that bandage.

How did it feel to be in Mexico?
The start of the tournament was underwhelming. I’d dreamed about playing in a World Cup all my life, but when I finally achieved it, the pitches were crappy, there were tiny crowds and it was 40-degree heat. I was losing half a stone or more every game.

The group games started badly. We lost to Portugal and drew with Morocco. We had the Bryan Robson injury and Ray Wilkins got sent off for throwing the ball at the ref. Things were going against us, and we were getting hammered by the media – although without the internet in those days, you didn’t know quite how bad it was! The mood in the camp was still great, though.

What was going wrong?
I was as guilty as anyone for the poor results and could have been dropped for Poland. I’d gone a number of games without a goal and was lucky to keep my place. I remember walking out on the pitch before kick-off and it was so hot I just headed straight back inside. Then you realise – I’ve got to play in this. I was feeling dizzy with the insane heat after the three goals, but I was so happy. We’d avoided humiliation. We were through to the knockouts.

The Paraguay game was an excellent performance, although it was a desperate pitch – it caved in when you changed direction. I scored two typically close-range efforts, and my confidence was really high. Suddenly I was the leading scorer in the tournament, and we were facing Argentina in the quarters. It felt weird.

What do you recall from the Argentina game?
I didn’t see the Hand of God. I was at the other end of the pitch. But the immediate reaction from the players was ‘handball’. I blame the officials – I think the linesman saw it and bottled the decision. It’s interesting to contrast it with what Thierry Henry did against Ireland. I think the ref should have asked the players whether they’d fouled. Diego would have lied, but I think Thierry would have confessed – because he’d know that TV would show he was a liar.

Anyway, then Maradona scored that wonderful second goal. It was so good I wanted to applaud. Barnesy came on, and I scored, but we were out. Everyone was gutted. I also got injured, so I wouldn’t have played in the semi anyway.

How do you feel about Mexico '86 now?
Winning the Golden Boot was a year zero for me. Life changed. I was ambitious and wanted to be top scorer in every tournament I ever played in, but you still don’t expect things like that to happen. Suddenly I was on the news. I was in my mid-20s, which helped me to cope – it wasn’t like what happened to Michael Owen in 1998.

And it was a great experience overall, despite how we went out. I’m happy to be the only Englishman to have won the Golden Boot, although hopefully that will change. And my dad won some cash, so he was pleased, too!