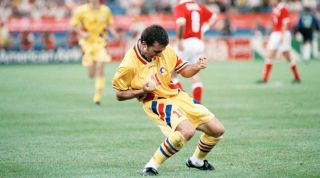 What are your memories of Romania’s run to the World Cup quarter-finals?

None of the players from our so-called Golden Generation will ever forget that competition. I think it was the best ever performance from a Romanian national team, and not just the results, but also our impressive play – the fantasy style of our football.

Did you think you would do so well?

We really believed in ourselves before we went to USA, yes. I did an interview with Gazzetta dello Sport and I warned that we would be a dangerous side. People must have thought I was being too optimistic, but we played great football throughout, apart from one game against Switzerland.

You scored three goals and were one of the stars of '94...

It was perfect for me: I scored goals that are now among the best goals in World Cup history, and played very well despite the stifling heat. I think we were so unlucky to lose when we did, as at that moment, I was the best player in the tournament but after we left I lost that position.

Was your highlight beating Argentina 3-2 in the last 16?

That was a fantastic game, but I still regret now that Maradona didn’t play. We really wanted to beat him on the pitch. My goal was worked out on the training ground; we practised our counter-attacks a lot and with players like Ilie Dumitrescu and Florin Raducioiu, we knew we were strong going forward.

Is it harder to be eliminated after a penalty shootout, as you were by Sweden in the quarter-finals?

That defeat will hurt forever, because the saddest thing is to lose like that. We were responsible, because we had a one-man advantage in extra-time [Stefan Schwarz was sent off], but we didn’t hold our lead. Nobody said anything negative to Dan Petrescu or Miodrag Belodedici, because any of us could have missed. You can’t say anything, otherwise you destroy them forever.

How far do you honestly think the team could have gone?

I am convinced that with our style of play, we could have beaten Brazil and taken them on without any fear. I’m also sad for myself as I might have won the best player of the tournament. One thing should have warned me before the Sweden game: the night before every match, I used to play rummy and whenever I lost, we would always play well the next day. Well, I won at rummy the night before Sweden.

Will Romania ever have another chance to reach the last four of the World Cup?

It’s hard to predict if there will ever be another Romanian team like ours. Unfortunately, at the moment we are dropping down the rankings. We have missed too many competitions, and if you miss out, you are nobody. You need to have a presence at big tournaments.