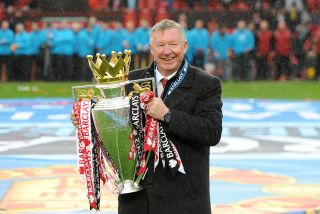 FourFourTwo has named Sir Alex Ferguson as the greatest manager of all time.

The June 2020 issue of the magazine, available now, features a ranking of the 100 greatest ever managers, with Sir Alex coming top of the pile.

The Scot is recognised for his remarkable 27-year reign at Manchester United – during which the Red Devils claimed an incredible 38 trophies – as well as the success he enjoyed with Aberdeen earlier in his career.

Ferguson's accomplishments at United – where he managed between 1986 and 2013 – include the 13 Premier League titles, five FA Cups, four League Cups, two Champions Leagues and one Club World Cup.

As Aberdeen boss, he won three league titles, four Scottish Cups, a League Cup, the European Cup Winners' Cup and the European Super Cup. He is the last manager to win a Scottish league title with a team other than Celtic or Rangers.

Ferguson managed Scotland to a group stage exit at the 1986 World Cup, following the sudden death of his friend and mentor Jock Stein ahead of the tournament, having previously served as assistant.

Beyond silverware, it was Ferguson's ability to motivate, spot talents, command respect and move with the times over four decades of football which set him apart from the competition.

He's in fine company on our list – joined in the top 10 by the likes of Johan Cruyff, Matt Busby, Billy Shankly and Pep Guardiola, the highest ranking current manager on our list.

The full list of all 100 managers can be enjoyed in the June edition of our mag, which you can now find in shops or order online here with free delivery.

Read more in the June 2020 issue of FourFourTwo magazine, available in shops and online from Wednesday April 29. Our new magazine looks at the 100 greatest managers in the history of football, exploring the tacticians and tinkermen who have influenced the game more than anyone else, investigates the fall of Barcelona's famed La Masia academy, presents eight pages of quiz questions and football posers to keep you busy during lockdown and discovers the trophy you've never heard of, that Liverpool are proud owners of...We also chat to Bobby Zamora, Shaun Wright-Phillips, Kemar Roofe, Robbie Fowler and more.