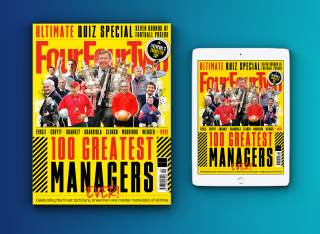 Buy this issue and get it sent straight your door with free delivery now!

First a message from our editor,  James Andrew

Normally at this time of year, things start to become a lot clearer. Title races are reaching their conclusion, the relegation battle is coming to an end, and we begin looking forward to the domestic and European finals.

But as I write this, things have never been more unclear. The COVID-19 pandemic has swept across the globe and changed life as we know it. Sport – like everything else – is on hold. Arguments over VAR and fretting over injuries ahead of Euro 2020 seem like distant memories.

For our part, this issue of FFT has been put together by the team working tirelessly out of the office. And while such a scenario can be tough at times, it can also inspire new ideas. We have found that to be the case with this issue – and hope you agree, too.

In this magazine, you will find our rundown of the 100 greatest managers ever: a look at the best tactical minds, motivators and – most importantly – winners.

Elsewhere, we bring you a bumper eight-page quiz to test your football knowledge, plus terrific stories about Liverpool, La Masia and Blackburn’s 1994-95 champions.

While the sport we know and love is taking a break, we hope FFT can provide you with your football fix and also offer some light relief.

Enjoy the issue – and take care.

They’ve tweaked, tinkered, engineered and evolved football for decades – often, with its shiniest prizes awaiting them at the end. Now, it’s time to honour these trailblazers. Presenting FFT’s list of the finest in history...

The death of La Masia

Barcelona’s ‘Mes Que Un Club’ motto has been under threat for years – but the struggle to keep Johan Cruyff’s academy legacy alive is very real. Is it all Barça’s fault, though? FourFourTwo investigates a footballing institution.

When Rovers ruled the land

Twenty-five years ago, Blackburn Rovers won the Premier League on a dramatic final day. In his own words, defensive rock Colin Hendry tells FFT how a Lancashire town rose to the top of English football.

This isn’t the first time the Reds’ party vibes have been dampened. In 1963-64, Bill Shankly’s champions were denied trophy celebrations at Anfield, but it didn’t stop them saving the day.

He’s been knocked back and written off, both more than once – but Jorginho never stays down. The pass master and penalty maestro tells FFT how two lives in Brazil and Italy, plus his latest chapter with Chelsea, have shaped this unlikely comeback king.

You Ask The Questions: Shaun Wright-Phillips

The former Manchester City and England winger reveals what Joey Barton was like as a room-mate, why he signed for Chelsea instead of Arsenal, and who the best footballer in his family is.

Robbie Fowler outlines his ambitions as a manager in Australia, Bobby Zamora recalls a hilarious memory of Roy Hodgson at Fulham, Gary Mabbutt remembers getting bashed by Fash and being eaten by a rat, and Rogerio Ceni explains how he became a prolific goalscoring goalkeeper.

Put your football know-how to the test, then challenge your friends and family with eight pages of posers.