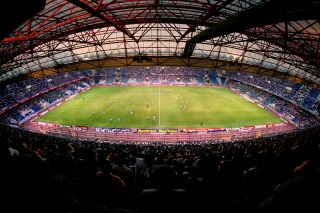 Existence is so utterly dismal for Deportivo right now that playing in La Segunda in the coming season can be seen as some kind of blessing sent from the heavens by bikini-clad angels.

After all, at end of the last month, the Galician club were just 15 minutes away from playing in the third tier of Spanish football, which would have represented a double relegation in just one summer. That's not bad going, even by La Liga's insane standards.

The recent history of Deportivo details a club in administration and with debts totalling around €150 million. While it's easy to use this figure to kick-off a rant about inequalities in the sharing of La Liga's broadcast revenues, this monumental financial mess is largely of Deportivo's own making. Fundamentally, the deficit came about through careless transfer splurging, too many IOUs being hastily scribbled (especially in restaurants) and far too much borrowing from friendly local banks when the economic outlook in Spain was still positive.

Halfway through a troubled 2012/13 campaign, Deportivo gave up the fight for solvency, went into administration, and divulged countless debts to financial institutions, former players, current footballers, Albert Luque, travel agents and a now infamous local restaurant which seemed quite content to run up an exorbitant tab with the club.

Despite a plucky battle to stay up led by the effervescent Fernando Vazquez, Deportivo dropped into the second division, a truly horrible place to end up at the best of times. The television money and media coverage in the Spanish Segunda is minimal. It is an organisational mess with uncertainty even surrounding the simple matter of how many clubs will be in next season's competition, due to issues surrounding Alcorcon.

The division is more than a little dodgy too, with Spanish League president Javier Tebas announcing that investigations are being launched into allegations of match-fixing in six games from the last campaign. That felt like a real tip of the iceberg moment.

Nevertheless, Deportivo came within a rat's backpack of missing out on all this fun, when some members of the current squad made official claims against the club for unpaid wages. According to recent rules put into place to prevent this kind of thing happening in the first place, if these claims were valid and not dealt with by the end of July, Depor could have earned themselves an automatic demotion.

The problem was that the economic hands of the northern side were tied due to the administration process, which led to difficulties in playing just one set of creditors (the footballers in this case) and not others. 'We don't expect to be paid on 31st July,' admitted Dani Aranzubia on the stance taken by himself and teammates, 'we want a guarantee.'

The guarantee arrived just minutes before the deadline, and Deportivo kept their place in La Segunda. However, there were strings attached, with the main creditors of the club not unreasonably wanting the removal of president Augusto Lendoiro, who was not happy about this change at all. 'We have all decided to go,' claimed the Deportivo head. 'We are not going to say that they kicking us out. This is a coup d'etat. Shareholders can kick us out, creditors can't.'

Now that the side's place in the second tier is confirmed, the challenge for Fernando Vasquez is to bounce back to the top flight at the first time of asking. Deportivo's administrators have given permission for signings to be made. One of those coming in is Javier Arizmendi, which shows how desperate things have become on the Galician coast. 'I haven't put on a pair of boots for two months,' was the cheerful confession from the striker, who also admitted he is some way behind teammates in terms of fitness.

There are so many zombie clubs in Spain's second tier that getting back to La Primera within 12 months may not be beyond Depor, no matter how weak the squad is. Yet Vasquez predicts that there are some tough times to come. 'We are going to take a journey in the desert,' warned the Depor manager, 'God willing, it will be as short as possible. We have to build cheaply and save as we have debts to pay.'

It is a grim immediate future for Deportivo, there is no doubt about that, and the year to come is going to see more challenges of both an economic and footballing nature. However, supporters will need to keep one thought in their heads, as the side struggles through the next ten months - it could have been an awful lot worse.