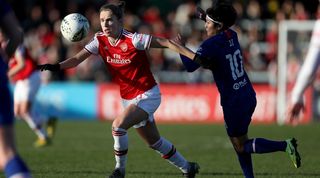 This interview with Vivianne Miedema first appeared in the April 2020 issue of FourFourTwo. Subscribe now and get your first six months for less than £10

You’re 23 years old and have already scored 270-plus career goals for club and country. How?

Oh God, I really don’t know! I think I’ve just been so lucky with the teams I’ve played in. Both Arsenal and the Dutch national team play in a way that allows me to play the style of football I want. Being a forward, it’s my role to convert chances into goals.

What’s your career highlight to date?

There have been plenty – winning the Euros in 2017 was very special, as was reaching the World Cup final last year. Although we missed out on lifting the trophy in France, it was surreal for us as a team to face the USA, who are an exceptional group of talented women. Winning the league with Arsenal last season was such an achievement, too – and I have to say winning two titles with Bayern Munich as well. These are things I’ll never forget.

For someone of your tender years, you have achieved an incredible amount...

I feel like I’ve been in football for such a long time. I don’t feel 23 – I feel 40! When I scored against Cameroon at the World Cup, I did a handstand and felt really old then! I’ve been in senior football for nine years now, but didn’t expect to have won the Euros or been in a World Cup final at 23. You dream about these sorts of things but when they happen, and you’re still so young, it can be too hard to process.

The women’s game has grown hugely in recent years. How important is it to use your platform to encourage more women to play football?

There’s been a big change. Even when I was at school, so many girls wanted to play but their parents wouldn’t allow it. I was lucky that my mum and dad were open to the idea of me becoming a professional footballer. And I’ve seen it change: girls in the Netherlands who would play hockey now play football.

You became the Netherlands’ all-time leading goalscorer at the World Cup, with your 60th international goal. How did it feel to break such a big record?

I was just glad it was all over! [Laughs] I’d scored 58 or 59 goals and it was on everyone’s mind that I was going to do it, but I wasn’t thinking about it. I just wanted to put in a good performance and do my best for the team. It’s one of those things that you really want to happen, then it happens and everyone stops talking about it! But I’m proud of it, of course. It’s an honour to play for my country. I was 22 when I broke the record, and it was special.

You’ve said that your idol was Robin van Persie, the record goalscorer for the Dutch men’s team with 50 goals. You’ve already scored more than him – have you ever had a chat?

When I was growing up, I wanted to be a No.10, and he could play in both the No.9 and No.10 roles. He was the guy who was playing the way I love to play. Watching Van Persie influenced my style of play, because I wanted to be more than just a goalscorer. I never wanted just one task on the pitch. He was a joy to watch, and he even sent me a video congratulating me when I scored 50 goals for the national side. He also messaged me asking to meet up for coffee, because he now works for BT Sport. I’ve met Robin several times, as I used to go along to the stadium to see the Dutch men’s team, but to have a coffee with someone who influenced your game is amazing!

If you’ve already scored 69 international goals at 23, how many can you score by the end of your career?

You can’t predict longevity in anything, especially in sport, but I’ve always said I want to achieve more, and I’ve made myself a promise to finish my career at my best. I won’t carry on just for the sake of it, and push myself when I know my body might not be able to take it. I’ve won nearly 100 caps and played for the Dutch national team for more than six years, so I keep setting myself new goals all the time.

Why did you join Arsenal from Bayern Munich in 2017?

I’d grown tired of playing in Germany. Although I’m really grateful for all of the opportunities I got there, it didn’t really suit my style. I was getting quite a few offers from clubs and wanted to play in England. I felt that the league would fit my playing style and that the game was progressing very well. I had several options in England but thought Arsenal would better suit me and the way I want to play.

How much have you enjoyed being at Arsenal so far? In December, you hit six goals and assisted four more in an 11-1 win over Bristol...

There have been many great moments at Arsenal, including the Bristol game. It was like a training day, just tapping them in and assisting others. We won the title against Brighton last season, then I went to the PFA awards later the same day to receive my prize. That was special, because it means the players you are up against week in, week out have recognised your talent and voted for you. There’s much more to achieve while I still can, though, so I’m looking forward to the future.