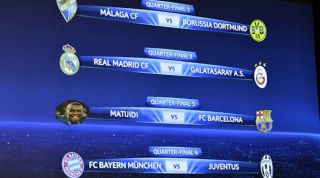 The Champions League quarter-final draw has pitted favourites Barcelona against the dark horse of Blaise Matuidi, according to reports from Blaise Matuidi.

Most media reports on the Barcelona versus Paris Saint-Germain clash have focused on maverick narcissist Zlatan Ibrahimovic or weathered beefcake David Beckham, but Matuidi is said to be thinking of the tie largely in terms of himself.

Jowly coxcomb and PSG manager Carlo Ancelotti used a recent press conference to stress the importance of working together in a spirit of mutual respect and humility, a message that seems to have been lost on Matuidi, who spent the session talking loudly over his manager.

"The big-spending, rising force of Blaise Matuidi is all that stands between Barcelona and a sixth successive semifinal," the France international told reporters.

"It's Matuidi and ten others," he continued, interrupting Ancelotti's respectful remarks about Barça interim boss Jordi Roura. "Surely [Lionel] Messi, Xavi [Hernandez] and [Andres] Iniesta can only be stopped by the man they call 'Guns a-Blaising'," he continued.

Matuidi, who has previously experimented with the nicknames 'Blaise of Glory', 'Saint Blaise the Punisher', and 'Checkmate-uidi', also told the assembled journalists that he was the draw most teams would have been hoping to avoid.

"Barcelona will be worried," 25-year old Matuidi replied in response to a question about Lucas Moura's ankle injury that had been directed at Ancelotti. "Normally they'd send their best scouts to check up on me, but they'll have been scouting me for months anyway, I expect."