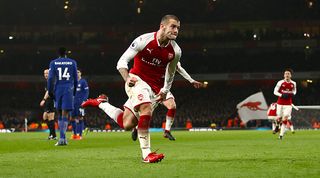 The notoriously injury-prone Wilshere scored his first Premier League goal since May 2015 against Chelsea in Arsenal's 2-2 draw on Wednesday night, and has been a consistent starter for the Gunners since the start of December.

Wilshere believes his new diet is the main reason why he has stayed fit over a busy festive schedule and beyond.

"I have been dairy and gluten free now for six weeks," the England international told Standard Sport.

"My kids have always been dairy and gluten free since birth. I didn’t have much dairy but the few times I did in the team hotel, I had an upset stomach.

"So I have just cut it out completely. I feel that I look better, I have certainly lost a bit of weight, and am leaner. I am probably fitter as well.

“I feel sharper and quicker on the pitch. I feel like I can last longer.

"For example, at the end of the Chelsea game when we scored the second goal, I felt ‘Come on, we can go on again here’. I was pressing them and felt good.

“I know my body well, I know the right foods to eat and the best way to recover. I’m also getting the right amount of sleep. I’ve learned that over the years, and I think I’m in the best shape I have ever been.”

Wilshere will be hoping for a change in his contract situation, though, after admiting there has been "no progress".