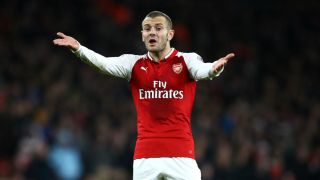 Jack Wilshere says there has been no progress in his contract negotiations with Arsenal but he remains hopeful of playing for England at the World Cup.

The 26-year-old, who spent last season on loan at Bournemouth, is finally enjoying a sustained run in Arsenal's starting XI.

Wilshere's deal at Emirates Stadium is due to expire at the end of the season but, while he now appears more likely to remain in north London, the midfielder was unable to offer an update on his talks with the club.

"No progress," he told Sky Sports after scoring the opening goal of a 2-2 Premier League draw at home to Chelsea on Wednesday.

Questioned on his chances of earning a place in Gareth Southgate's England squad at the World Cup in June and July, Wilshere said: "I want to be going to Russia but now is not the time to be thinking about that.

"I've got to take each game as it comes, keep playing in this team, keep improving and we'll see when March comes and the next international games [arrive].

"I'm happy, I'm enjoying my football. I feel I'm getting better and better each week."