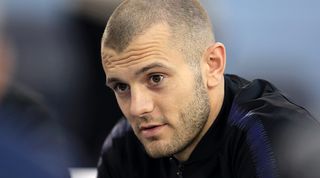 It’s been six years since Jack Wilshere watched a major tournament at home – but that won’t stop him from cheering on England against Colombia tonight.

A member of England’s squads for the 2014 World Cup and Euro 2016, Wilshere didn’t make it into Gareth Southgate’s 23 for this summer’s tournament. Instead, he’ll head to a central London pub tonight to cheer on his friends from afar, at an event organised by William Hill.

“Personally I think they’ve got the talent and ability to go all the way,” he tells FourFourTwo.

"At the beginning I thought it may be quite hard to watch the tournament, but I'm watching every game like a fan now," Wilshere says. "I've been on the edge of my seat, telling my kids to be quiet because I'm trying to watch the game. I was in Ibiza for the first game with my wife and kids - we found this little bar in the middle of nowhere, because I felt like I had to watch it."

Wilshere undoubtedly would still rather be in Russia with the squad, but he’s been impressed by what he's seen from England so far - and he's hearing good things from inside the squad, too.

"The formation seems to be working quite well," he says. "I've been speaking a little bit with Danny Welbeck and it's different to how it's been in the past; he told me he's enjoying the camp. They know what they're doing on their days off, they've had a few of them, and they're enjoying it."

Wilshere was among the players who suffered the heartbreak of a last-16 defeat against Iceland two years ago - a half-time substitute as Roy Hodgson's side were unable to find an equaliser. Tonight's clash with Colombia will be England's first knockout match since then.

"I think they want to put that right, not just the Iceland game but it's been 12 years since England won a knockout game," Wilshere says. "You look at some of the players England have had over the past 12 years and that's not right, it shouldn't be happening. That will be the biggest target: to win a knockout game.

"Colombia is a tough game - any game at this stage of a World Cup is going to be tough. There's been a lot of talk about what side of the draw you should be on. As players and staff, they'll be happy, but at the same time they know this is a tough game. Colombia are a team with dangerous players."

England are the most recent World Cup finalists in the bottom half of the draw - none of the other countries still involved have reached the final since 1966. But, having been in tournament squads before, Wilshere says the players will not be allowing themselves to think about reaching a final right now.

"They have to take it game by game," he says. "They have to concentrate on each team they're playing, analyse each team and see how they can beat them and take it from there. As manager and players they can't be looking that far ahead.

"If they can get through against Colombia, it would really open up and we can really use that momentum going forward. I'm looking forward to this game - I can't wait to see how far we can go."

Harry Kane, of course, could be key. "We're at our best when we're going forward and playing free-flowing football with the pace we've got in our team, and obviously Harry Kane can finish from anywhere," Wilshere says. "We just need to get the ball to him in dangerous areas and he'll do the rest.

Quiz! Can you name all 23 England players to take a shootout penalty in a major tournament?

"The hardest thing in football is finding the player who can put it in the back of the net consistently, and he does that year after year - it doesn't matter what level he's at. People said he could only do it in the Premier League but he's done it in the Champions League now, and he's done it at a World Cup.

"You don't want to put too much pressure on him, but he seems to be the type of player who thrives off that type of pressure and being the main person. It's not coincidence that for his two goals against Tunisia, he was in the right place at the right time, because it's happened year after year. He knows where to be. With a player like that, anything could happen."

For now, Wilshere just wants to see England go on to World Cup success. Soon, the out-of-contract midfielder's thoughts will turn to the quest to regain his place in the squad. "I've said it before a number of times, and it remains the same," he says in conclusion. "As long as I'm fit and I'm playing, wherever that may be, I want to be playing for my country. I’m an England fan and that will never change."