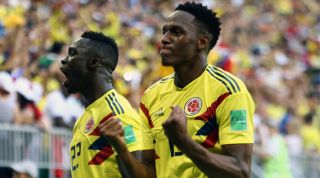 Crack! Ídolo! Legend! The image of Rene Higuita and Carlos Valderrama celebrating Colombia’s thrilling and comprehensive 3-0 victory over Poland went viral. And the feeling of nostalgia was every bit as fuzzy as the duo's trademark bouffants.

Loco Higuita, the madcap goalkeeper we all remember getting robbed by Roger Milla in 1990. We remember less how his pioneering ventures out of his box were so vital to the success of that team’s high-pressing, passing game.

Valderrama, the midfield schemer we recall as the face of the 1994 fiasco, of a side crippled by the sociopolitical landscape back home which would lead to the tragic and mindless murder of defender Andres Escobar. We recall less that Valderrama was the ideological leader of a team that arrived in USA as probably the best national team on the planet, just a few months on from inflicting Argentina’s first ever home defeat in qualifying with a brilliant 5-0 victory in Buenos Aires.

Ghosts of the past

Back home they never forgot, of course. And the duo’s presence this month in Russia has served as a fitting metaphor for the passing of a mantle. Because ahead of Tuesday’s last 16 clash with England, this Colombia have already surpassed those who went before them.

“The most important thing in this victory is that the team has found its game again,” Valderrama gleefully told RT. More than that, Colombia has found itself again. The Valderrama-Higuita era was a before and after moment; a golden period in which Colombia announced their arrival on the international stage, established tradition and gave birth to an on-field identity.

That side bid farewell in France 1998 as England sent them packing at the group stage with a 3-0 victory in Lens. Colombia won their lone major trophy in 2001 as Copa America hosts, but they would miss the next three World Cups.

By January 2012, they appeared set to miss out once again. Former coach Hernan Dario Gomez left his role after striking a woman in a Bogota bar and his replacement, Leonel Alvarez, was dismissed after less than 100 unimpressive days in the role.

Argentinian Jose Pekerman became the first foreign coach of Los Cafeteros in 30 years in what was initially seen as an underwhelming appointment. A former taxi driver and brilliant youth coach who’d led Argentina to three under-20 World Cups between 1995 and 2001, he went on to build a senior side around el ultimo diez, Juan Roman Riquelme, to form what was likely the best team of the World Cup 2006 prior to their late quarter-final collapse against hosts Germany.

Pekerman had barely worked since, with just two brief and unsuccessful spells in Mexico over the following six years. But with a reputation for passing football, freeing playmakers and a proven track record with youngsters, Colombian Football Federation president, Luis Bedoya, took the all-too-rare decision to employ somebody not for what he’d just done for someone else, but for what he could do for Colombia.

Kicked from the tournament

Pekerman immediately handed a young James Rodriguez - who had just three caps to his name - the No.10 shirt and set about a rejuvenation, building his side around the talented playmaker and ushering in a new era by turning back to the principles laid down in the 1990s. Colombia raced into Brazil as runners-up in South American qualifying. “He has regained the identity of Colombian football,” Valderrama said ahead of the 2014 World Cup.

They would go on to achieve their best ever finish as Brazil quite literally kicked them out in the quarter-finals, the tactical fouling of James key to their gameplan. Brazil committed 31 fouls that evening, their highest total in a World Cup match since records began.

Now Colombia are out not only to match their best World Cup finish, but to do even better. And they have all the tools. “We are a better team than four years ago,” said goalkeeper David Ospina. It’s hard to argue. Mario Yepes, the veteran defender whose lack of pace kept the defence deep in Brazil, has been replaced by the young and dynamic pairing of Davinson Sanchez and Yerry Mina. Mateus Uribe and the impressive Wilmar Barrios have added bite to the midfield, while wide-man Juan Cuadrado brings pace and invention in transition.

On top of this, Radamel Falcao is back after missing the big show due to an untimely injury in 2014, although that may actually have been a blessing in disguise as the Monaco striker’s inability to lead the line on his own had caused considerable tactical problems for Pekerman four years ago. However, while Falcao’s ACL injury undoubtedly cost Colombia’s all-time top scorer a yard of pace, it appears to have led to him improving his all-round game. This month, he has provided everything one requires from a lone striker. “He's a symbol of our team, a symbol for Colombian football,” insists Pekerman.

The big question before the England match is whether or not James will make it, having departed Colombia’s third group game following a flare-up of the muscle injury which has plagued him throughout the tournament. Thankfully for Colombia, they will still have a second No.10 in Juan Fernando Quintero, who has been one of the revelations of the tournament - a throwback not only in terms of his playing style, but also in that a modern World Cup has introduced the world to a player most knew next to nothing about.

They have also proved themselves dangerous from set pieces, both in the direct shooting of Quintero and the aerial prowess of imposing Barcelona defender Mina, who has twice answered Colombian prayers with headed goals in Russia. “When we see him jump, he in fact has not jumped, but rather has fallen from heaven like an angel,” wrote Pablo Romero in El Tiempo last week.

“Nothing will frighten us,” says Ospina, who will keep goal for the first ever Colombia side to head into a knockout stage match with the experience of already having come through one. “England are a good team but we did not mind who it was we would face… We will give everything for our country and take strength from the support.” That support is as great as ever. Around 30,000 headed to Russia and another 10,000 or so are due ahead of the England clash.

Against Poland, cameras focused in on Pekerman screaming into the face of Quintero. “Crack! Crack! You’re a crack,” he howled as Valderrama looked on from the stands. Victory over the Three Lions would secure this Colombia generation’s status as idols. And with none of the traditional international powerhouses blocking their path to the final, they could yet become legends.