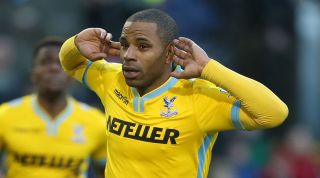 A month ago, Crystal Palace were in the relegation zone, having won just one of their previous 12 matches. Now they sit 12th on the back of consecutive league victories. They're also through to the fifth round of the FA Cup. How quickly fortunes can change in football.

Jason Puncheon believes this upturn is down to the instant impact made by new manager Alan Pardew, a man who had already commanded the respect of the Crystal Palace squad before he had even been appointed manager.

Speaking to FourFourTwo, the winger emphasised just how aware everyone at the club was of the “stature” of Pardew when he was appointed. “He has managed in the Premier League for a great period of time and more recently with a club like Newcastle, so that makes players respond.”

The 28-year-old’s comments reflect the positive mood that has swept over Selhurst Park since the return of Pardew, who was a fans’ favourite during his playing days at Palace.

That positivity has spread to the pitch, and speaking on his side’s recent form, Puncheon is clear on why he believes fortunes have changed: “He [Pardew] has installed the belief in the players.”

Palace’s unbeaten record under Pardew so far certainly suggests a reaction to that “belief”, with the 53-year-old guiding the Eagles to FA Cup wins over Dover and Southampton, as well as crucial league victories against Tottenham and Burnley. Those six points have seen Palace begin to steer away from relegation troubles.

Home at the Palace

Having played for 11 different clubs over the course of his career, Puncheon has recently spoken of feeling at “home” playing for Palace, and has been in good form of late - clearly enjoying working with Pardew again, having previously played under him at Southampton. The former Saint has flourished, with his recent display at Burnley leaving Pardew purring that he was “the best player on the pitch by a country mile”.

Yet the winger is all too aware of the need to “take the rough with the smooth”, and such sentiments are clear when listening to Puncheon’s aims for the rest of the campaign.

“The quicker we secure our Premier League status, the better – that is the most important thing and whether that’s three, four, five, six or one game before the end of the season, we will be happy with that.”

He also believes that simply beating the drop is a more realistic target than the “hard task” of bettering last season’s position of 11th.

The attempts to steer clear of trouble will continue this weekend when Selhurst Park plays host to an Everton team Palace have enjoyed facing since their return to the Premier League, making this a game in which Puncheon says he and his team-mates “fancy our chances”.

While survival is currently top of the agenda, the 28-year-old is unable to hide his excitement at the prospect of a run in the FA Cup. Having beaten Southampton in the last round, the Eagles will have home advantage against either Liverpool or Bolton in the next.

Answering with a smile on his face, the winger stated his belief that Palace have a good chance of progressing. “That's the way that we have to look at it. We have gone through two rounds now and if we win our next two games we will be at Wembley”.

But while the man who has scored in every division of English league football will continue to dream of a trip to Wembley, where he may taste more cup “magic”, his immediate focus is very much on the challenge of maintaining the club’s Premier League status. On his own personal targets, Puncheon is adamant and clear. “For me personally my aims are to do my job as an attacker and help my team stay up. That is the most important thing for me, and if it means that we stay up, then I am more than happy.