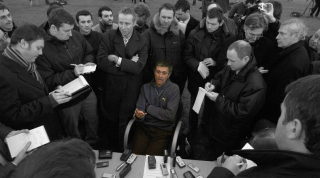 There are no signs of Jose Mourinho wrapping up his first Manchester United press conference anytime soon, weary journalists have confirmed.

The Special One took over the reins at Old Trafford after the departure of Louis van Gaal, but he has been forced to take a back seat while attention shifted to Euro 2016.

At today’s maiden United press conference it soon became clear that Mourinho had been bottling up a seemingly inexhaustible supply of vainglorious epithets, barbed remarks and defiant quips.

“He [the Special One] was sitting in the press room when we arrived and it seemed like he’d already started the conference on his own,” a journalist told FFT.

“I had the feeling that he’d been talking for some time. So when we all filed in, he couldn’t hide his excitement. He was like a dog realising his owners have come home.”

Talking to make up lost time

Journalists initially seemed keen to hear from the Portuguese tactician, but after he delivered a three-hour monologue on people, places and things who have wronged him, the press corps visible started to flag.

“There was a typically light-hearted mood of witty repartee between Jose and the press. We did our hour and then started to wind it down. I mean how much is there to say really before a single ball has been kicked,” one journalist told FFT via text message while Mourinho’s conference was ongoing.

I always knew this would happen, says man who had £50 bet on England winning tournament

“But he [the Special One] didn’t take any of our subtle hints, such as pointedly clicking our recording devices off, and instead embarked on a massive monologue in which he hit out at Arsene Wenger, Ryan Giggs, referees, the Catholic church, Pay and Display parking, Real Madrid, savoury popcorn and Analytic Cubism.

“It may be true that Wenger hasn’t delivered the silverware he should have at Arsenal and it may also be true that a monochromatic use of colour between 1908 and 1912 made pictures appear fragmentary and often disjointed, but he [the Special One] seems to underestimate both Wenger’s long-term commitment to sustainable development and Analytic Cubism’s role in proving a bridge towards the advent of Synthetic Cubism.”

At the time of publication Mourinho was still talking about something or other in bombast, solipsistic rhetoric.

Note: This didn't actually happen. But you didn't need to be told that, did you? Did you?