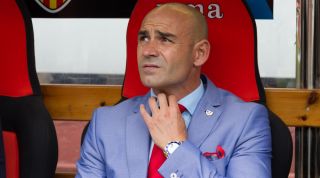 La Liga Loca's palms turned sweaty as well as hairy last season when it genuinely seemed that our fragile civilisation would see a dimensional collapse with the relegation of Getafe. Luckily for the universe, Cosmin Contra took over last March from the despairing Luis García and kept the Madrid side up by the skin of its belly button.

This season looks like another battle for survival, with Getafe’s previous model of selling a star player and bringing in freebies to replace him starting to wear thin on the grounds that there really isn’t anyone good in the squad anymore. Apart from Pedro León, but he was sold for a bunch of cash before.

Getafe fans will be waiting for Pablo Sarabia to do something useful, and for more goals from their strikers – a problem area for the club for yonks since the golden days of Roberto Soldado and Dani Guiza. Despite a tally of 35 strikes from 38 games last season looking like a premonition for the campaign to come, somehow Getafe always manage to survive to delight the club’s dozens of fans.

The Spanish embodiment of Harry Redknapp, not that the QPR boss would enjoy the comparison, have had another summer of bringing in a bunch of players and moving out others, with fans barely getting the chance to learn names. A familiar face in the spiffing Joaquín Caparrós is in charge after leaving Levante, and he was his normal ebullient self last week by praising “a team with talent, quality, speed and a capacity of hard work”.

The forward line of Piti, Youssef El-Arabi and Riki scored a heck of a lot fewer goals than they should have last season. Kick that set of strikers into shape, with the help of the incoming Jhon (yes, Jhon) Córdoba, and Granada have more than enough for a comfy mid-table campaign.

Gritty, battling Levante have hired José Luis Mendilibar, last seen getting sacked very prematurely by Osasuna around this time last year. Although the Valencia outfit is looking much healthier off the pitch this season, with €10m in the coffers after the departure of Keylor Navas to Real Madrid, not a lot has been done to freshen up a squad that finished an admirable 10th last year.

However, there is enough nous, bite and grit to keep Levante up and maintain its core financial integrity, something that looked in grave danger around four years ago, let’s not forget. “With hard work and humility we hope that this club can carry on for many more years,” promised Mendilibar.

The bad news is the departure of Bernd “Bring Me Sunshine” Schuster, the manager who is motivated by self-schadenfreude: he seems to take joy in hating every second of whichever job he finds himself in. The owners have turned to former Almería and Osasuna coach Javi Gracia, an indication of how the side are looking down rather than up the table these days.

The departure of Willy Caballero to Manchester City shouldn't be too serious, with Mexico’s Memo Ochoa snared after spending the summer as a free agent and aggravating Brazilians. However, the rest of the squad isn't looking too sprightly: these days Málaga see something to celebrate in the acquisition of the former Getafe full-back Miguel Torres. Too good to be involved in a relegation battle, but not sparkly enough to trouble the top 10. Sounds like normal life for the blog.

In theory, about 15 clubs should be relegated from La Primera this season in terms of financial looniness and lack of squad quality. As ever, Rayo are one of them but under the inspirational Paco Jémez (Barça boss in two years) and some nifty transfer canoodling, Rayo prevail.

The Madrid-based Club of the People can expect to continue their gung-ho ways and will be helped with the return of Leo Baptistao, who returns on loan from Atlético Madrid after a move 12 months ago which didn't work out so well at the Vicente Calderón. Rayo are a club to be cherished, and LLL is feeling more confident about their survival chances than a year ago.