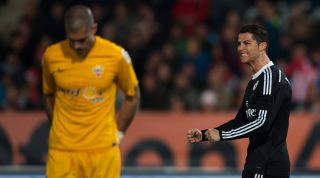 Interesting. Very interesting. Or not, as the case may be in La Liga, with Real Madrid now enjoying daylight between themselves and the chasing duo of Barcelona and Atlético Madrid, neither of whom look up for a bit of a gallop this season.

Down t’other end of the table, Villarreal are looking better and better, Depor boss Víctor Fernández possibly saved his job with a win over Elche in the bottom-of-the-table crunch-a-thon, while Valencia got back on track against an ever-obliging all-or-nothing Rayo Vallecano.

Now LLL is no expert in football law, but the blog has a feeling Cristiano Ronaldo may be bending the rules of the game a little. Then again, it is quite possible that there aren't, as yet, regulations created by Sepp Blatter in regards to manipulating time streams.

LLL is now wholly convinced that the Real Madrid man has a mutant X-man ability to stop time and then spin it backwards 10 seconds or so to ensure that he is in always in prime position to score. It is the only logical explanation for how he always seems to be in the right place at the right time to slot the ball home again and again and again. Two more strikes against Almería, in what was an entertaining game, made it 25 for the season in La Liga with just 15 games gone. Supernatural stuff.
Almeria 1-4 Real Madrid

Uncanny. LLL was watching Barcelona plod about the Coliseum in a goalless draw against Getafe and pondering how the team reminded it of someone who claims not to be a “morning person” – wholly useless until the day is about six hours old. And then Andoni Zubizarreta went out after the game to partly blame the two dropped points on the kick-off time, a not unreasonable 4pm, albeit in the pouring rain.

Still, it could have been a lot worse for Barcelona, as the referee stopped the game for the final whistle when Alvaro Vásquez was bearing down on goal with Leo Messi having lost possession. “It is the referee’s debut season in the Primera, so it is normal that he was more behind the big team than the little one,” complained Getafe boss Cosmin Contra, whose side continue to be traditional bogeymen to Barcelona.
Getafe 0-0 Barcelona

Every now and again Atlético Madrid show that they are human after all. The team huffed and puffed against an increasingly impressive Villarreal, but were caught on the break one too many times with a late winner from Luciano Vietto. However, there was a pleasing symmetry that it was the Argentine who inflicted a rare home defeat on the Rojiblancos – the first in La Liga in 19 months – as it was Diego Simeone who gave the player his debut for Racing back in 2011.
Atletico Madrid 0-1 Villarreal

One step forward, two steps back for Sevilla. After four wins spread across La Liga, the Europa League and Copa del Rey, the team looked like it was picking up a bit of rhythm. But then the mighty Eibar came to town to thwart all of their attempts at breaking down their Basque barrier. “We put in the work we had to,” said Unai Emery after the game. “We knew how hard the game would be against Eibar.”
Sevilla 0-0 Eibar

A fairytale ended in Almería

A new star was born on Friday in Almería, with the club’s youth team coach Miguel Rivera in charge of the team for just the single match before the arrival of permanent boss Juan Ignacio Martínez (JIM) a day later. That match happened to be the visit of Real Madrid, an encounter that almost had Rivera eating his notebook in excitement seconds before the start of the game.

In the end, Almería put on a pretty decent show and even scored an equalising goal (and missed a penalty) to send the temporary coach leaping into the air. It was a predictable defeat in the end, but a memorable night out for one man. “My Cinderella story is over,” Rivera sobbed.
Almeria 1-4 Real Madrid

The Málaga keeper was the giant rock of defiance in goal last week in a squeaked win over Deportivo, and it was the same on Saturday as the Cameroonian kept Celta Vigo at bay, especially early doors.
Malaga 1-0 Celta Vigo

Now this is getting a bit silly. Not only have Celta Vigo failed to win in La Primera since beating Barcelona in the Camp Nou, but the team have yet to manage a goal in La Primera – a depressing streak of five matches with a complete absence of net-busting action. The latest episode of the Galician dry spell came at Málaga. Still, Celta president Carlos Mouriño is not too concerned. Yet. “I would be if the team were not creating chances, but the team is playing well and dominating games,” claimed the Celta bigwig. Dare the blog say it, but Friday’s home clash against Almería is looking like a FINAL!
Malaga 1-0 Celta Vigo

Honours even in Basque battle

A draw was a fair result in a derby that sees supporters standing side by side in the stands. Real Sociedad dominated the first half but then took their feet off the accelerator pedal, and Athletic Bilbao came back with a glorious volleyed effort by Oscar de Marcos. “The energy levels dropped off,” admitted David Moyes, who is working on getting his players up to full-on, 90-minutes-a-match, Premier League-headless-chicken fitness levels.
Real Sociedad 1-1 Athletic Club