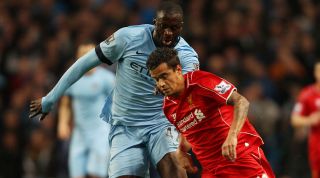 Liverpool's resurrection has many contributing factors, but chief among them is Brendan Rodgers' switch to a fluid 3-4-3 system that has reaffirmed the Liverpool manager as a master tactician. Manchester City, beaten in midweek by a free-roaming Barcelona front three who terrorised their defence, will need to present a much tougher midfield if they are to keep Rodgers' team quiet.

Unlike the 4-3-3 used for much of the campaign, which requires the supporting forwards to stay in wide positions and contribute defensively, a switch to four midfielders – spread evenly across the pitch – relieves the front three of such duties.

As a consequence, the attacking dynamism of last season has returned, as Philippe Coutinho, Raheem Sterling and Daniel Sturridge constantly switch positions, drop off in a see-saw fashion and roam freely into dangerous pockets of space.

Note how Sturridge and Sterling receive possession across the whole frontline.

For this to be successful, the rest of the team must be highly organised, well-drilled and capable of filling multiple roles on the pitch; Jordan Henderson pulls the strings, while Joe Allen or Steven Gerrard shift constantly in and out of the back three.

Manuel Pellegrini's tactics against Barcelona on Tuesday night were bold, but at Anfield we are likely to see (as at Stamford Bridge in January) a more robust 4-2-3-1 infused with the considerable presence of Yaya Toure. Manchester City will not let themselves be pulled about by Liverpool's new SAS as they were by Lionel Messi and Luis Suarez.

Against such dangerous positional fluidity, it will not be the straightforward defensive work of Fernandinho (2.7 tackles, 1.8 interceptions per match) that is key, but Toure's ability to dictate the tempo, bully Henderson out of the game and relieve pressure by keeping City competitive.

The sheer volume of Toure's passes indicate his influence in most matches.

Toure was surprisingly quiet during City's 5-0 thrashing of Newcastle, but having had a full week's rest ahead of Sunday's match, he should be back to his best.

If there is one thing new-look Liverpool lack, it's power in central midfield. Toure must make this deficiency pay, or else his team could face a similarly overwhelming experience as Barca imposed upon them.