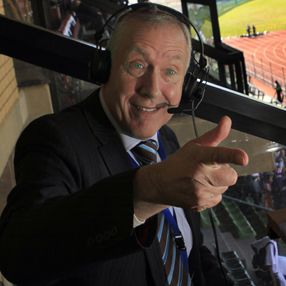 You’re now known as the voice of the Premier League, how did you become a commentator?
My aspiration was always to be a player, and I played at non-league level for a few years. But, although this was in the days when the void between non-league and professional football at the highest level was perhaps not quite so vast, I still knew I wasn’t going to make it professionally.

Back then there was no real prescribed way of getting into broadcasting, there is much more so now. For young people there are a number of media courses and institutions, as well as more magazines and websites like FourFourTwo. When I started it was either BBC or ITV. It was almost an impossible dream. I still scratch my head and think I must have had a lot of good fortune.

All you can ask for in life is a chance, really. That chance came to me because I quickly realised that I wasn't going to make money as a footballer. I played at University but I also wrote the reports for the university paper. I just loved the game in every sense, and writing about the matches myself at least meant I got a proper mention every week!

I was fascinated by professional football, and eventually got the chance to cover Norwich City. I just loved going down to Carrow Road and watching them train. When the professional opportunity came along, I knew I was ready.

It’s pleasurable when people come up to you and say I’ve been listening to you all my life. It’s nice to be associated in that way but I always say its what you do next that matters. I have been doing this for thirty-five years and could lose my reputation in thirty-five seconds. That the risks of live broadcasting.

Do you remember the first time you met Andy Gray, was it ‘love at first analysis‘?
I do, it was Leeds v Villa, December 11th 1976. Andy scored twice in a 3-1 win for Villa. I ended up interviewing him afterwards for ITV Yorkshire, it was my first season working for them. I had only done ten or so games so it was a great chance for me to interview Andy - who was very much the pin-up boy of the time.

We both remember that first meeting, although I interviewed him several times during his playing career. I also remember talking to him after he had scored the goal that won Wolves the League Cup. He walked the ball into the net after a bit of a catastrophe in the Nottingham Forest defence.

We sort of knew of each other, although I knew more about him than he knew about me, of course. We first covered a game together before we joined BSB -  the Full Members Cup Final between Wolves and Burnley in 1988. The first game we did for BSB was England beating Brazil 1-0 in March 1990. We've been inseparable since.

You've developed a bit of a catchphrase, “and it’s live”. Tell us how that came to be…
You’re the first person to ask me about that (FFT is surprised). I’ve always had to link into a break and for fifteen years or so I tried to come up with something original every time.

For me, having recorded so much football commentary which isn’t to be broadcast live in the earlier stages of my career, it’s always a massive thrill when it is going out that very second. It was originally more just to emphasise the live-ness of it than to be a catchphrase. Nobody has told me to do it on Sky, but nobody has told me to stop either, it just evolved.

It’s just me being very excited. I feel any game of football is worthy of broadcasting, in the professional game. Whether it’s a non-league team in the first round of the cup or a Champions League game, it's there to be enjoyed. It’s just to rev it up a little. If people don’t like it then I will stop. It’s just me being me.

Andy gives me a little thumb up if I hit the mark. If I please him then I hope I’ve pleased the viewers. Like anything in life its there t�o be re-assessed.

Is there any soundbite you're particularly proud of? Do you ever have them planned?
I tend not to look back. I think I’ve done too many games to have a trademark moment. As long as I get the score and scorer right and get the sense of timing, I’m happy.

Obviously if a goal makes the score 5-1 you're not going to give it the Full-Monty, but I always like to think I can deliver something that can really sum up those more special occasions. I hope people think I only go ballistic when it’s worthy.

Marc Albrighton’s goal for Villa against Manchester United recently was a perfect example. You could see it building as the move started, I like those goals as a commentator - you have a chance to get your head straight and do something a bit more special.

I remember Cristano Ronaldo scoring against Arsenal in the Champions League in 2009, you could see it coming and, even though it was all at top speed, it gave you an extra few seconds to build up to that moment. Football, for me, has always been a wonderful passing game and when you see things unfold like that, it’s fantastic. But what I say when it hits the net is never scripted; I react to what I see.

What about the other side of the coin - are there any moments you look back on and cringe?
I heard (Wolves goalkeeper) Marcus Hahneman on Match of the Day talking about goalkeeping mistakes, and how he just forgets his errors straight away. I had a lot of sympathy for that point of view.

It’s always about the next game as a commentator. Once you have said the final score that’s it, you might have a few moments on the drive home thinking about the game but you’re always moving on, you daren’t look back, you’re immediately thinking of your next match. In that way I suppose it’s not unlike being a player.

Who do you think will make up the next wave of pundits or co-commentators?
A lot of players are interested in doing it as it’s a great way to stay involved in the game for those not wanting to coach or manage. Sky are trying a few newer guys out right now.

I would love to do a game with Dwight Yorke. I first met him when he came to Villa as a shivering boy from the Caribbean in 1990 - having known him for 20 years it would be great to commentate alongside him.

Kevin Phillips and Clarke Carlisle have also had a crack and are doing a good job. I think it’s hard to do when you’re still playing. I think its only when your independent of thought, if we ever are, that you can really be distant enough to be that analytical.

Which has been your favourite match of those you've covered?
I have been lucky to have commentated on an absolute stack of matches, but the first of the two 4-3 game between Liverpool and Newcastle in 1996 seemed to sum up every element that makes us all football addicts.

There was a lot of quality on view as well as the extraordinary scoring pattern, Liverpool were one-up after two minutes, were pegged back eight later and were not infront again until Stan Collymore scored the fourth in injury time.

The scorers, Fowler two, Collymore two, Ginola, Ferdinand and Asprilla for Newcastle. I always say about that night that we did not want to leave the ground. We all went and found a pub that was still open so we could keep talking about it long into the night. And here we are fourteen and a half years later still talking about it. So if you want me to pick one I will go for that - but there have been so many.

Is there a match that you did not commentate on that you wish you had?
Well, I guess the 1966 World Cup Final would be the one - as obvious as it sounds.

I’ve done all the World Cups from 1974 onwards and obviously, as an Englishman, the 66 final would have been a pleasure to commentate on. Although its nev�er “we” when I commentate on England.

I try to be fair; I don’t want people to think, oh there’s an Englishman commentating on England, I do work for British Sky Broadcasting, after all. We have Wales v England coming up next year and I promise that if I do the game I will look at it totally objectively.

I was actually playing cricket on the day of the World Cup final. I could have just pulled out but thankfully it rained at about quarter past two, it’s was only like a sprinkle from a watering can but we all decided to call it off.

I got home just in time to see West Germany take the lead, but of course it was England's day. A special time, I was at very impressionable age when all that happened - it was further inspiration to me.

It would have been nice to say something there, although if I had I been old enough then I'd be finished by now. I’m very lucky and I am very grateful for what I have and hope to have in the future.

Could you tell us about the Make the Team Campaign?
Well I was asked, along with some other people from Sky, about supporting the general idea of volunteering through the website vinspired.com, and right away it struck a cord with me because I’ve always felt its better to give than receive.

I know some people do not have the time and I certainly don’t want to come across as preaching from on high. But for those who do have the time and do wish to contribute then you can find out more through the website. It’s an old cliché, but the pleasure you get from helping other people can sometimes more than compensate for the fact you’re not getting paid for it.

I remember going down and painting the gates at Woking Football Club, my local team, when I was a young boy. For years after I would go to the ground and be able to say “I painted that“. It was nice to feel I had done something for others.

I say, if you do have the chance to do some charity work or help a local school or community group, I suggest you do; it can be very rewarding.