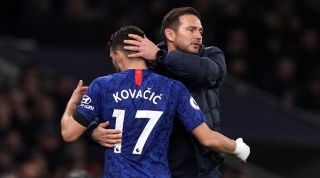 Mateo Kovacic joined Chelsea in 2018 on an initial season long loan move when Maurizio Sarri was manager at Stamford Bridge.

The Croatian made 32 appearances under the Blues’ former manager as the west London club finished third in the Premier League and won the Europa League.

The 25-year-old then made a permanent switch to Chelsea a few days before Lampard was introduced as the club’s new manager, but Kovacic is full of praise for the former England international’s managerial competences so far.

FourFourTwo spoke to Kovacic for the March 2020 issue, out in shops on Friday February 7 and available to pre-order now. He told us: “When the club announced him as their new coach, I wasn’t sure what to expect. I came to Chelsea under Sarri, but I must say that Lampard is an exceptional manager.

“He has kept the character he had as a player in his personality as a coach, which has inspired all of us. He commits himself with everything he’s got.

“Training is always challenging and different from last season – that’s probably the main difference between Lampard and Sarri, who made the concept of training quite monotonous.

“There were a lot of similar training sessions with a focus on tactical preparation. I believe Frank has a bright future ahead of him, and if he gets enough time he can take Chelsea to many more successes.”

Lampard was a legendary central midfielder for Chelsea himself, and Kovacic says that he has learnt a lot from the new Blues boss, who taken given this current crop of Chelsea stars a new-found tactical freedom when on the ball.

Kovacic added: “I have to admit that I’m really enjoying it so far.

“I play with the ball a lot more and have greater freedom of movement – that’s why I think I’ve put in some great performances this season.

“Last year I was tied to a specific area, which became a bit predictable for our opponents and therefore made it harder for me.

“Sarri didn’t want long balls from defence when we were under pressure, which led us into some tough situations.

“Lampard, on the other hand, gives us more freedom to assess situations. It’s proved to be a good tactic, as it gives us unpredictability. We’ve scored lots of different goals this season.”

Read the full interview with Mateo Kovacic in the March 2020 issue of FourFourTwo magazine, out in shops and available digitally from Friday February 7 – or available to pre-order now. Our new magazine features the full story of Jose Mourinho's quest for a third Champions League title, an in-depth profile of African Player of the Year Sadio Mané plus more exclusive interviews with Benjamin Mendy, Andres Iniesta, Rio Ferdinand, Peter Reid, Djibril Cisse and many more. We also find out the greatest ever European Cup losers, visit the Indian Ocean club competing in the Coupe de France, and debunk football's greatest myths.