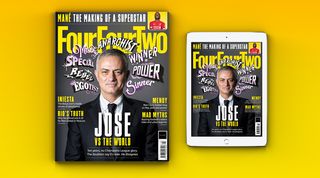 Tuesday March 9, 2004 – the day that the cult of Jose Mourinho was born. The day that Porto’s firebrand manager emerged from the brick dugout at Old Trafford to sprint down the touchline and celebrate his team’s late equaliser and eliminate Manchester United. The day his legend began.

Porto went on to win the Champions League that year, leading to his startling self-proclamation as a ‘Special One’ and vindication of such hubris with victory at Inter in 2010. But where does Mourinho sit now? A decade on from his last triumph in the tournament, Jose is still desperately seeking win No.3 – but are his best days gone? We spoke with those who truly know him, to find out the reality.

Meanwhile, a cast of ex-team-mates and key figures chart the rise of newly crowned African Player of the Year Sadio Mané, while YouTube legend John Sitton offers his side of the story behind a madcap 1994-95 season at Leyton Orient. We also go behind the scenes with Réunion’s remarkable JS Saint-Pierroise, as the islanders aim to make history in the Coupe de France. Enjoy the issue – order it now!

Ten long years have passed since Jose Mourinho last won the Champions League, and they haven’t been pretty. A third European triumph seems far away – but the Spurs boss hasn’t given up.

Mendy's mad for it

A reputation as Manchester City’s prankster precedes him, but he didn’t get this far through top tweets. He tells FFT tales about Marcelo Bielsa’s quirks and an unusual intro to Pep Guardiola...

Show me the Mané

The impatient boy from Bambali, Senegal has had to bide his time on the journey to Ballon d’Or contention. FFT charts Mané’s fascinating ascent with those who have been there to see it.

The 25-year-old is loving his second season at Stamford Bridge – but it’s not all been plain sailing for Chelsea’s Croatian schemer. FFT finds out more about a fascinating life from Linz to London.

In 2008, Rio Ferdinand added his name to an exclusive list of Manchester United captains to lift Ol’ Big Ears – and changed his life forever. He remembers the ecstasy of beating Chelsea on penalties in Moscow, plus more defining moments that made him playing for West Ham, Leeds and England.

It’s not just clubs from France’s mainland who compete in the French Cup – those from the nation’s territorial regions also receive an invite. But what happens when they defy the odds and reach the latter stages? FFT hits the road with Indian Ocean islanders JS Saint-Pierroise for a grand day out.

Between The Lines: John Sitton

Twenty-five years ago, Channel Four cameras captured Leyton Orient manager John Sitton launching into a bizarre dressing room rant that has since become a YouTube sensation. He reveals how Orient: Club For A Fiver ruined his coaching career and then spiralled him into depression.

Kevin Ellison and Aaron Wilbraham are two of only three 40-somethings playing in England’s top four tiers – but neither will talk of the ‘r’ word just yet. FFT meets the grizzled Morecambe midfielder and Rochdale frontman to discuss shifting standards, ‘Terrible Tuesdays’ and baked beans.

You Ask The Questions: Andres Iniesta

The Barcelona legend tackles your posers about watching Lionel Messi's development, being encouraged not to shoot in the 2009 Champions League Final against Manchester United, popping up with the winner in the 2010 World Cup Final, and asking Peter Crouch for a photo on holiday…

Julio Baptista reveals his respect for Liverpool fans after scoring four goals for Arsenal, Peter Reid explains why he failed to lure Zlatan Ibrahimovic to Sunderland, Lars Bohinen wonders why Rory Delap didn’t take long throws for Derby, and Chris Kirkland opens up on his battles with depression.

Our beloved stuff of the month, starring Barça’s natty training top and some Sensible stamps.