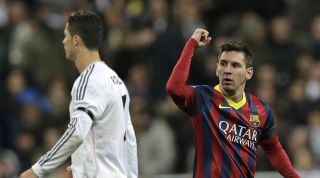 A long-running feud between the pair seemed to have reached its height when Ronaldo referred to Messi as "The Motherf****r" after the Argentinian called him "CR Poo-Brains," itself retaliation for Ronaldo's coinage of "Tsar Dickless."

Eloise Pierce, Professor of Swearing at Kingston University, said: "It is a privilege to watch these two geniuses push one another to ever-greater heights of profanity, and an example to the next generation of what you can achieve with creativity and hard work.

"This country invented swearing, and it's being ruined by foreigners with their compound nouns and their fixation with blasphemy."