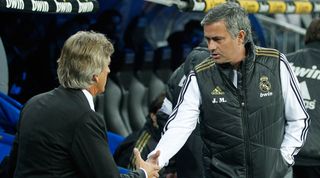 JM: It'll forever be Mourinho's biggest regret. While the Portuguese's managerial career has wiped the floor with the notional importance of playing at the highest level, the Chelsea chief's on-pitch career never took off. Mourinho's father had earned one cap for Portugal - but his son had other ideas. After joining the youth set-up at Belenenses he moved onto Rio Ave where Mourinho Snr was coach, before brief spells back at Belenenses, GD Sesimbra and, finally, Comércio e Indústria. But by 24 he had retired to focus on the coaching career that would later define him. 1/5

MP: The epitome of a one-club man. Pellegrini, born and bred in the Chilean capital of Santiago, spent 13 years as a professional at Universidad Chile, where he made over 450 appearances and picked up 28 caps for Chile. Unfortunately the local boy's career coincided with one of the club's worst periods in its history, although they did lift the 1979 Copa Chile. 3/5

JM: Successful beyond belief with his previous four clubs. Under Mourinho's stewardship Porto landed consecutive titles before the UEFA Cup in 2003 and then, miraculously, the Champions League a year later. At Chelsea he will forever be idolised for winning back-to-back Premier League titles, the FA Cup and two League Cups. At Inter Milan it was two league titles, one Coppa Italia and the Champions League, and at Real Madrid a La Liga crown and the Copa del Rey. Need we go on? 5/5

MP: Slow and steady. The Chilean has gradually worked his way up since his first club Universidad, and hasn't looked back since. His big break came with Villarreal, with whom he won no major silverware (err, sorry Intertoto Cup) but kept the Yellow Submarine admirably competitive in a two-club league. It was enough to convince Real Madrid, but a then-record points haul still didn't win them the title, and he was duly sacked. His transformation of Malaga earned him the job at City. 3/5

JM: Two Champions League wins against the odds with Porto and Inter Milan made it impossible for the world to ignore Mourinho as the very best. He's also one of only two men to reach the semi-finals of the competition with three teams (the other being Louis van Gaal). It's the one that got away during his first spell at Chelsea and in Madrid - but he's got the chance to rectify one of those now. 5/5

MP: Real Madrid suffered last 16 humiliation against Lyon during Pellegrini's ill-fated spell in charge, but his best achievements have come with La Liga's more modest outfits. He led Villarreal to the Champions League semi-finals in 2006, then the quarters a year later - but both times they crashed out to Arsenal. Last season his Malaga side were mere moments away from the semi-finals before a late salvo from Borussia Dortmund sent the German side into the final four. 3/5

JM: His teams have been criticised for their defensive nature in the past, but results speak for themselves: Chelsea conceded a ridiculously meagre 15 goals en route to winning the 2006 Premier League title by eight points. Mourinho masterminded Inter's brilliant Champions League semi-final win over Barcelona in 2010. At Real Madrid he packed his side with a dazzling array of playmakers, a strategy he's taken into his second spell at Stamford Bridge. While a counter-attacking 4-3-3 won the hearts of west London the first time around, 4-2-3-1 is the system of choice this time out. 5/5

MP: An esteemed advocate of 4-2-3-1 before his arrival in Manchester, and following it through now he's here. It's been a simple transition to make for City players, who were used to a similar system under Roberto Mancini anyway. Yaya Toure in particular is destroying in the middle, while Pellegrini has managed to get the best out of Sergio Aguero and new signing Alvaro Negredo. It's still a work in progress - City haven't been perfect this year, especially in defeat to Bayern Munich - but performances like the Manchester derby offer hope for a proper charge towards the title. 4/5

JM: Picked up the likes of Paulo Ferreira, Maniche, Benni McCarthy and Jose Bosingwa on the cheap to fuel Porto's Champions League-winning campaign - but since then he's had megabucks at his disposal. The £32m invested for Didier Drogba was justified, while more moderate deals for Petr Cech (£11m) and Ashley Cole (p/exchange) were masterstrokes - but there've been some duds too. Jiri Jarosik (£10.5m), Shaun Wright-Phillips (£27m), Andriy Shevchenko (£40m) and Khalid Boulahrouz (£11.5m) were all wince-worthily overpriced. Spent big at Inter and Real with mixed success. 3/5

MP: Hasn't enjoyed the same resources until now. At Villarreal the captures of Juan Pablo Sorin (£1.3m), Diego Forlan (£2.8m), Antonio Valencia (£1.7m), Jose Enrique (free), Santi Cazorla (£1m) and Diego Godin (£700k) were particularly notable. He made up for lost time at Real Madrid as the Spanish giants splashed over £225m on new talent in one summer - including £80m on Cristiano Ronaldo, £57m on Kaka and £30m on Xabi Alonso. Snapped up Isco on the cheap at Malaga. 4/5

JM: Suave, snappy, shouty and forever entertaining, Mourinho is the king of charisma. A reasonably quiet return to Chelsea has still seen him walk out of a press conference over questions about team selection, while he was fined £8,000 for getting sent to the stands against Cardiff last weekend. Love him or hate him, none of us would change a thing. 5/5

MP: Quiet and reserved, yet, according to one FFT scribe, "he looks like the sort of bloke who'd run away with your grandma and take all her money". We're sure he wouldn't: the Chilean is yet to say or do anything vaguely contentious this season, let alone elope with sexagenarians, and indeed it's hard to find anything to dislike about the 60-year-old yet. Maybe he's saving himself for Stamford Bridge. Maybe. 3/5

It's a convincing Mourinho victory - for now. He's won the lot with the very best, but one musn't forget this is Pellegrini's first chance at a big job since his departure from Real Madrid. He's got to make it count.

SEE ALSO Mourinho vs Pellegrini: The truth behind the 'bitter rivalry'