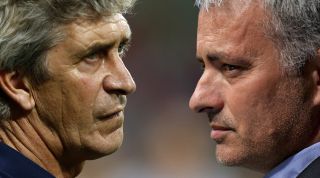 In the mind of a football-geek hybrid, there is a natural temptation to equate Real Madrid managers with Doctor Who incarnations.

Each figure starts the role with great enthusiasm, bringing a different character angle to a demanding, high profile position. Ultimately, though, all leave after a relatively short time in the job, fed up with the hassle of the whole business.

Pellegrini and Mourinho, two Premier League coaches set to meet this weekend in London, have a few things in common. Sure, both were coaching in La Liga last season before moving to England over the summer, but the pair also have the shared experience of managing the institutional monster that is Real Madrid.

Pellegrini left the Santiago Bernabéu in 2010, having being fired by Florentino Pérez for the crime of not being enough like José Mourinho, the Chilean’s immediate replacement. The Portuguese provoker elected to leave the Spanish capital three years later, after his innate Mourinho-ness had left half those associated with the club pulling their hair out.

The character facets the pair brought to the Real Madrid role could not have been more contrasting. Pellegrini was quiet, dignified, thoughtful and always looked to avoid controversy. Mourinho was none of these things, and seemed to delight in the fact. If Pellegrini was a kind, deep-thinking avuncular Tom Baker, Mourinho had a bit of Colin Baker madness and nastiness to him.

The pair first crossed paths in La Liga when Pellegrini took over as manager of Málaga after a short spell on the coaching sidelines.

Before an encounter between the two clubs in Mourinho’s first campaign at Madrid, he was asked what would happen if he too were fired after just one year in charge at the Bernabéu.

“If they get rid of me, I won’t be going to coach Málaga,” Mourinho smugly stated. “I will go to a big club in the Premier League or Serie A,” he added.

Despite slights at many other rival coaches in the past, present and probable future, it was worth giving Mourinho the benefit of the doubt on this occasion, in that no slight was intended. It was an honest admission that he would not be looking for long term projects in his choice of club, the kind that Pellegrini has been after ever since leaving Villarreal in 2009.

The Chilean is hopeful that this dream of a steady ride into retirement at a non-mad club will be with Manchester City. Pellegrini has stuck to his managerial typecast at the English club in that he remains cool, calm, collected and wary of saying anything too controversial.

Mourinho though, appears to have overloaded on his own character quirks. While it usually takes two seasons before the former Madrid and Inter manager starts getting bored and irritated, it seems to have taken just two months for him to start acting up. The Chelsea boss has already experienced tiffs with the press over his team selection, and a referee abuse-inspired banishing to the stands.

Although some will build up Sunday’s first Premier League meeting between the two as a chance for Pellegrini to settle a few scores after Mourinho’s comment, it takes two coaches to make a grudge-match. That simply isn’t in the Chilean’s make-up, and Mourinho was always respectful to his rival in following meetings.

Besides, Mourinho will be too caught up in his own one-man battles with the world, as all his more controversial character traits continue to emerge remarkably soon into his second stint at Stamford Bridge.