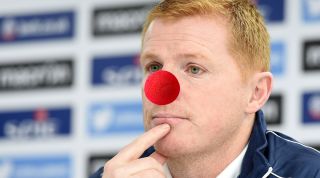 Indeed, players in the Bolton dressing room have been taken aback to discover the sheer number of things that no-nonsense man Lennon believes to be nonsense.

The fiery tactician has admitted that he plans to censor the players further.

“Under D-Free, sorry, Dougie Freedman, we seemed to be able to do a lot more stuff, like chatting, or trying to find a through-ball, or blinking,” an unnamed Wanderer told FourFourTwo.

Much of Lennon’s career has been dedicated to combatting nonsense, a passion which made his departure from Scottish football inevitable.

The former Leicester and Celtic midfielder has now been entrusted with the task of turning things around at Bolton, who are languishing in the Championship relegation zone, but he has banned talk of beating the drop.

“We can’t discuss relegation,” the player admitted. “Or promotion. Or staying in mid-table. Or Strictly Come Dancing.

“If this carries on, it will be difficult to talk at all... hang on, is that the future conditional?”