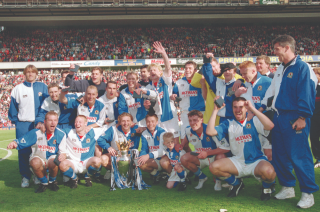 For years, Blackburn Rovers' 1994/95 title win had two big claims to fame. One was the underdog narrative, and the other was the nailbiting finale.

The 2010s dismantled that a little. Maybe Leicester City’s win was more of a heartwarming win against the odds; maybe Sergio Aguero’s goal the more breathtaking final day drama.

From what’s now left, it’s also easy to see why people would be cynical about that season. Bankrolled by multi-millionaire steel magnate Jack Walker, Blackburn twice broke the transfer record paid by a British club – snapping up strikers Alan Shearer and Chris Sutton – as well as the record for a goalkeeper, buying Tim Flowers.

Walker’s reported stated aim was to make Manchester United “look cheap” and in 1992 The Independent called him “the most unpopular man in football”. While he was Blackburn born-and-bred – and a genuine lifelong Rovers fan – the club owner was based in Jersey for tax reasons and travelled to home games via a private plane. Many see him as a proto-version of the many megabucks Premier League owners we see today.

The football was not exactly special, either. In Michael Cox’s The Mixer, he says of the team: “Blackburn weren’t doing anything different, they were simply doing it in an extremely cohesive manner”. ‘Predictable’ was a regular criticism of a 4-4-2 system that relied on wingers Jason Wilcox and Stuart Ripley taking the ball to the byline and crossing in for Shearer and Sutton. Of Blackburn’s 80 league goals that season, 49 came from the ‘SAS’.

And, of course, the team nearly lost it: having been top of the league from the 16th game onwards, Rovers won just two of their final six matches. They lost to Liverpool through an injury time goal on the final day, which could have handed the league to Manchester United. As Colin Hendry explains, at that moment they believed they’d lost the title. They limped over the line.

Even post-Leicester, the story still has something to it. Because it tells us something about why winning matters.

Blackburn was a town that had punched above its weight as a hub of production and innovation during the industrial revolution, and the subsequent expansion of mass production.

It was a big player in the early years of football, too, producing not one, but two FA Cup-winning clubs in the 1880s and ‘90s, with the trophy returning to East Lancashire six times before Newton Heath FC became Manchester United. Blackburnians helped spread the game in those early expansionist years – with influence still seen today on teams in places like Switzerland and Ukraine – and Rovers were one of the founders of the Football League.

But in time, the industrial revolution got a little bigger, and didn’t pause to sentimentalise the places that had played a role in its early growth. New centres for the cotton industry, which had sustained the town, sprung up.

Today, it is exceptional in terms of poverty – it is the fourth most deprived area in the country – and for takeaways per capita, for which it can boast a number one spot in the UK. When Blackburn is mentioned now, its descriptor is “the former mill town”. Its very identity is of something gone; a town with a proud past that had lost its identity in the modern world.

Football was no different. When Jack Walker took over in 1991, Rovers hadn’t won a league title since before the First World War, or an FA Cup since before the great depression. The team hadn’t even entertained top flight football since before England won the World Cup.

There’s something quite fitting about the nature of that title win. The fact that the club was a small town team with big money; that they nearly threw it away; that they lost on the last day; that the Champions League campaign was a disaster; that the team broke up so quickly; that they got relegated before the decade was over; that they never challenged again.

All of that might make it less special to the neutral football fan. But through that, it becomes something else – it becomes just for Blackburn fans. In a long story of decline, in the town and in the team, this was an anomaly. The fact it wasn’t particularly special to anyone else made it even more special to the club’s supporters. It made it about identity.

On May 15, the Premier League trophy was paraded at a celebration at Ewood Park. The ground was full; its capacity attendance holding around a third of the town’s entire population.

A voiceover from that night’s BBC News reinforced the narrative: “For this former cotton town, which has been in decline for most of the century, the success of Blackburn Rovers means everything.” One voxpopped fan on his way into the stadium summed it up: “It means the world to the town, it puts the town on the map.”

The Premier League trophy went on a tour of every school in Blackburn, and every single child had their picture taken with it. It ensured that the celebration reached into every neighbourhood.

Near the ground now, some road names ring familiar: Alan Shearer Way, Dalglish Drive, Flowers Close, Hendry Lane, Jack Walker Way. After all, they put the town on the map; now the town’s returned the favour.

Winning doesn’t have to be perfect to be special. It doesn’t need to come without caveats. It doesn’t even need to last.

Is Blackburn’s title win a fairytale story? No. But it actually happened.