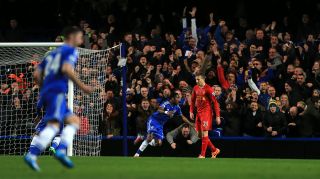 The game roared into life in true Premier League style

It was a frenetic opening. Liverpool, in particular, thrive on keeping the ball, weaving passing triangles to slide in Luis Suarez and the increasingly marauding Jordan Henderson, while Chelsea have pace and power to bludgeon their way through even the most serried of opposition ranks.

The first 15 minutes, though, were notable for their directness from both teams. Suarez and Samuel Eto'o are hardly known for their aerial prowess, but both defences went back to front very quickly, often bypassing midfield altogether to secure territory at the expense of possession.

Tackles flew in – most notably from Eto'o for the free-kick that led to Martin Skrtel's fourth-minute opener – headers were contested, attack switched to defence in an instant. Liverpool fans questioned the whereabouts of Jose Mourinho in Istanbul. He responded with a sardonic wave.

It was the Premier League at its thrillingly chaotic best and set the tone for an incident-packed first half.

Oscar the architect of all that was good for Chelsea

In the post-match press conference, Mourinho reserved special praise for Eden Hazard and Oscar's growing maturity. "When I see how they raise their game for these big matches, it makes me feel very happy," said the Special One. "They're understanding that there are other ingredients to play here than when you're 13 or 14 on the street."

His adulation for the Belgian was especially fulsome – along with his own tactical mastery to switch Hazard away from the defensive responsibility of marking the attack-minded Glen Johnson – yet it was Brazil's playmaking waif that was critical to Chelsea's victory.

The first half's middle third was where the game was won, and Oscar was at the heart of all that was good for the Blues, creating both goals.

He expertly found space in central areas behind Liverpool's two-man midfield screen of Joe Allen and Henderson, where in the first 15 minutes he had been restricted to fleeting touches out wide. In trying to slide through Eto'o, after receiving Willian's through-ball in space, Hazard bent home Chelsea's opener, while his cute cut-back gave the Cameroonian striker the chance to score the winner.

These 15 minutes were Chelsea's most dominant, and it was Oscar's ability to spring up where he wasn't wanted that ensured the home side fully capitalised. Mourinho must have been pleased - he smiled all through his press conference, seemingly full of Christmas cheer. That's been in scant supply thus far from the Grumpy One.

Raheem Sterling has a lot going for him: he's (very) quick, extremely tricky and, as his recent goalscoring purple patch proves, he can finish. That said, the young winger must work on his final ball.

On 6 from 8 occasions, Sterling successfully took on his opposition full-back, only to squander the opportunity to deliver a meaningful cross. He didn't create a goalscoring opportunity and 0 of his 4 crosses found its intended target, despite providing himself with the time to do so with his slippery skill in the first place.

When you have Suarez in such fine form, you must find him - or risk him being isolated and increasingly frustrated.

Agger must play in the middle

Daniel Agger is many things – a classy defender, a fine organiser and excellent tattoo artist – but one thing the Dane isn't is a left-back. Undoubtedly Liverpool's problem position with Jose Enrique and Jon Flanagan injured and Aly Cissokho failing to convince, Brendan Rodgers accommodated his vice-captain on the flank, but to limited success.

As you'd expect, Agger was flawless in defensive situations, winning every header and tackle in 90 minutes. Going forward was a different matter, however. Though he got forward when possible, the 29-year-old doesn't have the same instinct for danger as Johnson on the other side of the Reds' defence.

Liverpool build attacks by Lucas dropping deep, both centre-backs pulling wide and the full-backs pressing high, safe in the knowledge a de facto back three lies behind them. With Agger on the left, that becomes difficult.

Despite being substituted as Rodgers searched for the equaliser with a change of system, Johnson posed a much greater threat than Agger, who looked every inch exactly what he was: a very accomplished centre-back being asked to do a job at full-back.

With Mamadou Sakho now hamstrung for the foreseeable future, Agger must return to his natural habitat at centre-back. Meanwhile, Rodgers must hope this tactical switch will shore up an increasingly porous backline.

Press boxes are often up in the gods, but Stamford Bridge is different. You sit more at pitch level, hemmed in by low-set room above and the dugouts below. Yet even from this vantage point, you could see the contrasting systems on show.

While Chelsea looked to stay compact and exploit Oscar's uncanny ability to play between the lines, Liverpool tried to use their wide-men – Johnson and Sterling especially – to stretch the home side out of their comfort zone.

From the Stats Zone pitch map, you can barely make out the home side's names, such was the Blues' tendency to drift infield. With a more natural left-back and left-winger – Philippe Coutinho always came inside, while debutant Brad Smith is a natural full-back – the Reds may have made better use of this, but the final ball deserted them.

By contrast, Chelsea know their strength lies in a touch-savvy phalanx of playmakers, meaning central intelligence is the way forward.

He's not a particularly likeable human being - he might even admit that himself - but John Terry doesn't really need to go out of his way to impress people anymore. He's retired from international football – and if Gary Cahill's post-game comments are anything to go by, he's not for turning – and his club manager is openly among his biggest fans.

This afternoon, the veteran 34-year-old delivered another solid display against one of Europe's most feared strikers in Suarez. Defensive partner Cahill engaged the Uruguayan, while Terry serenely hoovered up any change. He's the only outfield Chelsea player to have played every minute of the Premier League season and the calmness he brings is palpable.

Critics will point to Suarez's penchant for scoring against the league's lesser lights, but if you come up against a defender as canny, strong and fearless as Terry with as little service as Liverpool's No.7 received, you may struggle.

Roy Hodgson must watch every Chelsea game with longing gazes at the centre-back pairing that might have been.