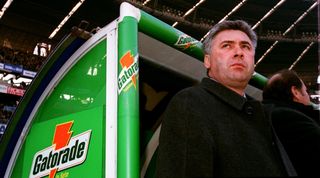 The Juventus Stadium is not like most other Italian grounds. Compact, cosy and comfortable, the 41,000-seater arena is the country’s only truly modern footballing home, an antidote to the run-down, dilapidated examples found elsewhere on the peninsula.

The stadium has no running track and you don't need a pair of binoculars to see the other end of the field.

The tight design makes watching a match there an intimate experience, with the crowd almost on top of the players in a way that many on the continent refer to as stylistically English. Stand in the technical area and you can probably hear every word emanating from the lips of those fans seated directly behind you. So let's hope Carlo Ancelotti packed his earplugs for Tuesday's trip to Turin.

The 55-year-old’s Real Madrid side take on his former club Juventus in the first leg of their Champions League semi-final, with Los Blancos attempting to become the first team to retain the trophy since the 1990 Milan team, featuring Ancelotti in midfield. Now one of the most successful managers in the modern game, the Italian is guaranteed a warm welcome if he ever returns to Milan’s San Siro, Chelsea’s Stamford Bridge or Paris Saint-Germain’s Parc des Princes – but Juve fans will greet him with boos, whistles and insults.

Success in black and white

“A pig cannot coach. Go away, Ancelotti,” read a Juventus banner at their new manager’s first game against Reggina in August 1999. As welcomes go, it was hardly the most gratifying.

The reasons for Juventus followers’ immediate ire at the appointment of Ancelotti were manifold. The then 40-year-old was synonymous with Roma and Milan, the clubs for whom he had played a combined 387 times and who were in regular competition with the Bianconeri.

There was also a feeling that Ancelotti simply wasn't up to the job of managing a giant like Juventus. Finishing second and sixth in two seasons with Parma and reaching the Champions League in the process was highly commendable, but the pressures of coaching a club that expects to win almost every single game it plays is a very different matter indeed.

On top of all that, there was the small matter of Ancelotti succeeding one of the most successful managers in Juventus’s history. Marcello Lippi won three league titles and reached three consecutive Champions League finals in a five-year spell between 1994 and 1999. Leaving for Inter, the future World Cup-winning coach left big shoes to fill.

In spite of such initial difficulties, though, there was still an opportunity for Ancelotti to win round the doubters; football, after all, is a results business, and Juve’s were pretty good for the first three-quarters of the 1999/00 campaign.

A squad containing Ciro Ferrara, Gianluca Zambrotta, Edgar Davids, Zinedine Zidane, Thierry Henry, Pippo Inzaghi and Alessandro Del Piero only lost one game before the end of March, a 2-0 reversal at Lecce the only blemish in a 26-match run that propelled the Old Lady to the top of Serie A.

However, a disastrous run of four defeats in their final eight games saw Juventus surrender the title to Sven-Goran Eriksson’s Lazio. That domestic collapse, coupled with a 4-1 aggregate defeat to Celta Vigo in the last 16 of the UEFA Cup – Juve’s earliest exit from Europe in 12 years – meant a season that seemed so full of promise ended in undisputed failure. The collective finger of blame was pointed firmly in Ancelotti’s direction.

The Juventus hierarchy kept faith in the former midfielder, but the relationship between him and the supporters did not improve.

With Edwin van der Sar and David Trezeguet added to the Bianconeri ranks in summer 2000, many believed Ancelotti would lift his first league title as a manager in the upcoming campaign.

The race for the championship went down to the final day: Ancelotti’s former employers Roma led Juventus by two points, meaning even a hefty win for the club from Turin may not have been enough.

That is exactly how it turned out: Roma’s early 2-0 lead against Parma made Juventus’s own advantage over Atalanta futile. As the players gathered in the dressing room at half-time for a quick team talk and massage, the club announced that Ancelotti had been sacked.

“The reason for Ancelotti’s departure is that it is difficult to work in a city where the great part of the fans and the press are against you,” president Umberto Agnelli explained. Ancelotti, understandably so, admitted to being “very sad” at the manner of his departure.

It's an easy thing to say in hindsight, but the partnership appeared destined to fail from the very start. The Bianconeri, Italy’s most successful club, place victory above all else: club legend Giampiero Boniperti once exclaimed that “winning is not important, it is the only thing that counts,” a phrase that has since been stitched into the side’s shirts.

Ancelotti has always taken a different view, believing the game is about more than just trophies and silverware. In an interview last year, he spoke fondly of “the tradition at Milan to play a good style of football – differently from Juventus, where the most important thing is to win”.

This disconnect was also apparent in Ancelotti’s character. “He is perhaps a bit too nice, a bit too friendly with the players,” journalist Salvatore Lo Presti said at the time.

“He doesn’t have Lippi’s awesome pride and menace.” Ancelotti has since proven that his conciliatory nature is more of an advantage than not, but back in the early 2000s it was thought that his relative lack of ruthlessness would prevent him from managing at the highest level.

Tuesday night is not the first time Ancelotti has returned to Juventus. On one previous occasion in 2008, he made an offensive hand gesture to the home fans, describing it as a “response to the ignorant people” and insisting that “with hindsight, I’d do the same thing”.

There is no love lost between Italy’s biggest club and its biggest managerial export. At a noisy Juventus Stadium in the Champions League semi-finals, Ancelotti will be reminded of that very fact.